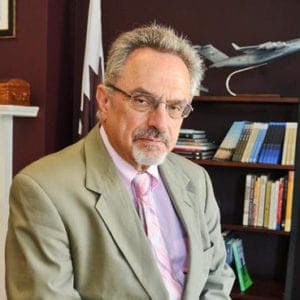 From oil collapse to civil war, the events on the Mediterranean over the past decade have echoed across the world, and have often found themselves in America’s backyard.

Ambassador Patrick Theros, the former ambassador to Qatar, joined The Cats Roundtable to untangle the paradoxes of a region that has played a vital role in U.S. foreign relations, and why the countries along the Mediterranean will continue to play an integral role in world affairs.

In order to understand the present, Theros pointed to the recent past.

“We are still seeing what happened in 2010,” he said, indicating the series of revolutions across the Middle East widely called the “Arab Spring.”

These revolutions were the reaction of modernizing societies overthrowing their governments, Theros explained, but besides Tunisia, which saw lasting Democratic reform, many drifted back into sectarianism or oppression.

In countries like Syria, where over half of a million people have been killed in a civil war, international powers use the turmoil as their proxy war, with Iran and Russia propping up the oppressive government against a rebellion supported by Saudi Arabia.

As for Libya, where an ongoing sectarian conflict has exacerbated a migrant crisis into the E.U., Theros said that there was “no governance left.” He explained this was due to the former dictator of the country, Muammar Gaddafi, taking down the “apparatus that is the country” before he was overthrown.

The chaos after Gaddafi’s death has been fueled in part by the participation of regional powers in the conflict looking to “gain advantage” of Libya’s major oil exports. The conflict has split the country virtually in half, with the UN and U.S. recognized governments in the west, and rebels in control of the oil fields in the east.

More recently, Turkey has gotten involved in Libya for its own reasons, Theros explained. This reflects Turkey’s growing nationalism, with its occupation of border regions in Syria last year, disputes with Greece and Cypress, and its decision last week to convert the Hagia Sofia from a museum to a mosque.

This has raised questions about the overall protections of Christians across the region, and Theros pointed out that while he doesn’t think violence against Christians is growing, he does believe more are departing.

“The threat to Christianity in the region has been the departure of Christians, even more than what has happened to them,” Theros said.

But he said that strange, if unnerving paradoxes do exist there, such as in Syria.

“The most Christian-friendly government in the Arab world is the dictatorship of Bashar Al Assad,” Theros said, adding that because of the growing extremism in the rebel factions, Christians in Syria “are taking refuge in regions controlled by the Assad government.”

Add that to the fact Assad’s government is supported by traditional U.S. adversaries, Iran and Russia, and the line increasingly becomes harder to draw.

Theros also explained how oil continues to be a major sore spot for global markets. He pinned the blame on Russia and Saudi Arabia and their inability to agree, following the United States becoming self-sufficient in its oil production.

“What has caused the greatest increase in production in the United States has been American fracking,” Theros said, adding that by using “new technologies” America has become the number one producer of oil, fundamentally changing the market.

“The problem was that there was a difference between Saudi Arabia and Russia on how to deal with this,” Theros explained. While Saudi Arabia wanted to cut production, Russia wanted to keep production to “drive American companies out of producing.” This led to both countries punishing each other, pumping even more oil into the market, and leading to the collapse of oil prices.

Theros called Russia and Saudi Arabia’s fight a “suicidal race to the bottom, for everybody,” a race that started with the increase in U.S. production, but was accelerated with the pandemic, when travel ceased, businesses shuttered, and supply-chains froze.

While Russia is beginning to come around to Saudi Arabia’s argument to cut production, Theros says that either way, the balance will be a difficult one as long as the U.S. continues to hold the “Trump card”.

John Catsimatidis · Ambassador Patrick Theros 7-12-20
Previous Post Randi Weingarten - What is it going to take to get teachers back in classrooms?
Next PostGordon Chang: We Need to Send a Strong Message to China

Randi Weingarten - What is it going to take to get teachers back in classrooms?
Comment
Gordon Chang: We Need to Send a Strong Message to China
This site uses cookies. By continuing to use this site you agree to our use of cookies: Find out more.