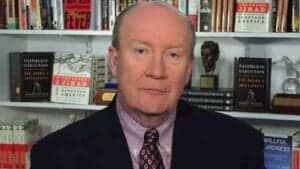 This past Monday, a federal appeals court blocked Michael Flynn and the Justice Department’s motion to dismiss his case. With November looming, the move has experts, like former assistant U.S. Attorney Andrew McCarthy, warning that the federal judge could drag the case until after the election.

“I think what’s going on here is he’s trying to push the thing beyond election day,” McCarthy told The Cats Roundtable, adding that “a Biden Justice Department wouldn’t dismiss the case against General Flynn.”

McCarthy pointed to the “erratic” behavior of Judge Emmett Sullivan leading up to the Monday ruling. This includes a scenario in late June when an appeals court ordered that General Flynn’s case be dropped, which Judge Sullivan failed to sign off to, effectively throwing Flynn’s fate in limbo.

“He should dismiss the case—but he doesn’t like General Flynn—he thinks he’s guilty,” McCarthy noted.

The latest reversal in Flynn’s trial caps an already explosive judicial drama. Flynn had initially pleaded guilty in 2017 for lying to the FBI as part of the Trump-Russia investigations, but later retracted his plea, citing that prosecutors had coerced his plea with threats to indict his son.

McCarthy told The Cats Roundtable that Judge Sullivan will be spiting the course of justice if he sets back Flynn’s case.

“There really should have never have been a case in the first place, but I think Judge Sullivan was annoyed,” McCarthy said.

The former federal prosecutor turned from Flynn’s case to the federal response towards organizations behind the violence that has shadowed often peaceful protests across the country. But McCarthy noted that moves to stop the violence have worked, such as Trump’s Executive Order on June 26th that aimed to protect American monuments and curb a “violent extremist” campaign that had hijacked protests over police brutality.

“The Justice Department made it very clear it was going to follow the President’s directive,” McCarthy said. “If people deface statues, they were going to be prosecuted for it.”

McCarthy explained that while Trump had stopped the symbolic violence, he was happy to see that Federal agencies and Attorney General Bill Barr were also paying the proper attention to the threat posed by left-wing organizations.

He told The Cats Roundtable that he sees the approach to stop the violence and dismantle the structures behind it as twofold.

In the first stage, McCarthy referred back to the 1980’s and the Travel Act, when a protege of Rudy Giuliani, McCarthy helped the future Mayor ramp up his prosecution of organized crime. McCarthy said the Travel Act made it possible to “indict people for crossing state lines for committing violent crimes.”

“I think the Justice Department is starting to look at that as a template in terms of how to go after the people who are burning down these cities,” McCarthy said.

The second stage involves building cooperation between local, state, and federal officials, which Trump has already done in major cities like Chicago, Los Angeles, and New York, where existing task forces have long ties with the Justice Department.

According to McCarthy, this cooperation includes federal contributions to state and local officials, so local agencies can investigate more cases.

But in a time of increased partisanship, McCarthy admitted that some local officials will balk at the chance. In that event, he said it “didn’t make sense” for the federal government to step up its assistance to cities that scorn the help.

“The most important thing is you have to get a city government that is willing to cooperate with the federal government and the Justice Department,” McCarthy reiterated.

However seamy the underbelly, McCarthy is sure that Barr and the Justice Department are up to the task. He reiterated the age old mantra: to know if you want to get to the bottom, follow the money.

“One of the best ways, in terms of intelligence, that you can map an organization, is by watching the money flows,” McCarthy explained. How they move their money, and what they do with it when they get it—I trust that Attorney General Barr is on it.

NY Comptroller Tom DiNapoli - The state of finances in New York.
Comment
Gordon Chang: China is Messing Around
This site uses cookies. By continuing to use this site you agree to our use of cookies: Find out more.