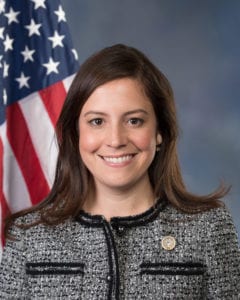 New York Representative Elsie Stefanik, member of the House intelligence committee, stopped into The Cats Roundtable to give her take from inside the impeachment hearings—why the charges leveled at the President don’t amount to impeachment—along with what she hopes the future of the impeachment process will reveal.

Representative Stefanik was clear with The Cats Roundtable about what she calls the “partisan impeachment process.”

During a November 15th intelligence committee hearing, member Devin Nunes yielded his witness questioning time to Representative Stefanik, but was ruled out of order by committee chairman Adam Schiff. “Adam Schiff gaveled me down,” Stefanik said, but added rule-outs won’t deter her from “focusing on the facts in the impeachment hearings.”

“And why are the Republicans not allowed to speak?” Catsimatidis asked the Representative.

“Because Adam Schiff made up these partisan rules that does not allow members to yield their time to other members,” Stefanik said, telling The Roundtable such a move is “unprecedented.”

As of Sunday morning, Representative Stefanik anticipates Democrats on the intelligence committee will organize a report to hand over to the judiciary committee after Thanksgiving.

“The key point to note is that ultimately this will go to the United States Senate,” she said, adding that the failure of Schiff to allow Republicans to call key witnesses will be rectified.

“I anticipate the Republican Senate is going to call some of the key witnesses that we’ve been limited by Adam Schiff from calling,” she informed the show.

The Representative explained that despite the partisanship, she appreciated “every witness who has testified.”

“I asked questions of Fiona Hill and David Holmes this week,” Stefanik said, calling both “strong public servants” who, when asked if “they have direct evidence of quid pro quo,” could not provide any.

Representative Stefanik wants to let The Cats Roundtable know she is thankful for the “outpouring of support” because of her shining a “light on how unfair this process has been,” and informs the show that those who seek to help her “to fight back” should donate to her website, www.fightschiff.com.

“Are any of the Common Sense Democrats opposing what’s going on with the so-called progressives?” John asked.

“Two Democrats actually voted with the Republicans in opposition to Adam Schiff’s rules,” she said. “Two Democrats crossed the aisle to vote…and I anticipate that number is going to grow when Pelosi brings an impeachment vote to the floor.”

She notes many Democrats represent districts that voted for President Trump in 2016, and these “common sense” districts are seeking a focus on passing updated trade deals, growing the economy, and making priorities be “put on the back burner” by the impeachment process.

“I think the American people want the voters to decide,” she admitted. The election is less than a year away. Let’s let the voters decide.”

Ambassador John Negroponte: The Winter of (Popular) Discontent
Comment
State Senator Diane Savino - The "Gig economy" and Millennials.
This site uses cookies. By continuing to use this site you agree to our use of cookies: Find out more.