Dr. Terrence Sejnowski: Breakthrough’s in Neurology Lead Have Led to Breakthroughs for AI 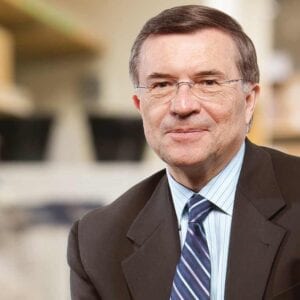 As the complexities and mysteries of the human brain are unlocked by neurologists, researchers are taking those discoveries and applying them to the invention of new, modern AI.

“There has been a convergence over the last few years,” said Dr. Terrence Sejnowski about the cross-over of neurological research and AI technology.

As the Francis Crick Professor at the Salk Institute for Biological Studies, Sejnowski told The Cats Roundtable AI design was “being inspired by that architecture” found in the brain, and could be new tools to help answer some of human biology’s most pressing questions.

For the treatment and research for neurological diseases such as Parkinson’s and Alzheimer’s, AI can help on 2 fronts, Sejnowski told The Cats Roundtable.

The first is as a tool to navigate the massive amount of health data for patients in the world today, and the second is to design new preventative treatments for the disease, where Sejnowski explained serious breakthroughs have been made.

“The part of AI that I am involved in has figured out how to predict the three-dimensional structure of proteins,” Sejnowski noted.  This structure, known as “protein folding”, is what he calls “the holy grail of biology” because “these structure of the protein determines its function, and being able to predict how the function will change as you change the primary sequence of amino acids”–meaning there’s greater leverage to make and design better drugs and treatment.

And in terms of a patient’s data, AI technology research is helping make in-roads into the prediction of disease.  For diseases such as Alzheimer’s, the need for earlier “biomarkers” is important to potentially recognize its presence before it becomes untreatable.

“We need to have biomarkers that are even earlier, we need to be able to predict,” Sejnowski said.  “And by the way, it’s not just what you’re genetic predisposition is, although there are genes that actually predispose to Alzheimer’s.  But we know that the environment, and things that happen to you like blows to the head, we know that can actually precipitate Parkinson’s.  So, it’s both your life history as well as your genetic risk factors that we need to include in the data that the AI has access to.”

According to Sejnowski, as the population across the country age, the need to answer questions about the mind can’t go neglected.  But the doctor told The Cats Roundtable that science was on the task when it came to AI technology and neurology, especially when it came to mimicking in AI technology what are called “columns of neurons” found in the brain, where special neurons perform specific tasks.

Rep. Peter King - Trump impeachment acquittal
Comment
Former Rep. Peter King: GOP Should Stop “Forming a Circular Firing Squad”
This site uses cookies. By continuing to use this site you agree to our use of cookies: Find out more.