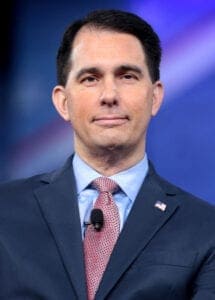 There’s a common question going around:  is 2020’s election looking a lot like 2016’s?  From the states that are looking to determine the election to the poll numbers that show Democratic nominee Joe Biden leading President Trump into November third, it does sound familiar.

With toss-ups in swing-states like Wisconsin and Pennsylvania, the question of which candidate has the pulse to the Midwest is taking on extra importance.

“It is razor-thin,” former-Wisconsin Governor Scott Walker said about the race in the Midwest.  “It was four years ago, it’s going to be just as close now.”

Walked expressed his skepticism of the poll numbers on The Cats Roundtable this Sunday, saying that many of the polls touted by media outlets showing Trump behind Biden said the same in 2016.

Walker said that the next few days were perhaps the most “critically important” in the election, and while he said he was “hoping for the same results,” he expected this election to “boil down to the last few votes cast.”

And the candidate those last few ballots choose could be shaped by recent events, especially after a summer of protests and violence rolled across the country.  In Wisconsin, Walker said the violence had turned into a “big, big turn off” for voters in key critical counties, such as Kenosha.

He said voters had noted Trump’s quick calls for law and order, and Biden’s slow response to the violence.

“It sent out a warning sign to a lot of the suburban voters elsewhere in the state near Milwaukee who were very, very concerned about their own safety,” Walker said. “I think in the end the President if he wins, which I hope he does, it will be because of that moment when people started to set aside some of their other issues and realized the safety of themselves and their families was paramount.”

The anxiety rippling suburban voters was one of the reasons some Democratic bastions, like Minnesota, were “a factor now.”

The “tell-tale” sign is Biden’s campaigning in Minnesota ahead of November 3rd.

“The Democratic candidates wouldn’t be in Minnesota, they wouldn’t be in Wisconsin if they didn’t see what we did—which is a big concern,” Walker said.

Along with suburban voters, Walker told The Cats Roundtable Trump’s support among “out-state” Midwest voters would again make the difference.

“Out-state voters are very, very concerned, and they were key to the President winning Wisconsin four years ago—because they feel forgotten, and this President, more than anyone I’ve heard before, really speaks to the forgotten men and women of America.”

Walker said other swing-states like Michigan remained “too close to call,” but he felt confident the election could be determined by the decision of Wisconsin and Pennsylvania.

“I think it’s going to boil down to Wisconsin, and Pennsylvania, those are the two states to watch on election night.  By early that night, we should know whether or not those two states were the key to President Donald Trump and Vice President Pence getting reelected.

Newt Gingrich - America at a turning point in history.
Comment
Former Speaker Newt Gingrich: A Vote For Trump is a Vote To Keep the Country Open
This site uses cookies. By continuing to use this site you agree to our use of cookies: Find out more.