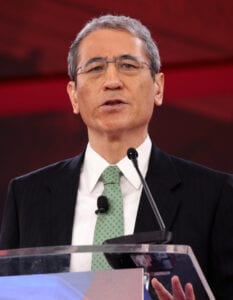 China has taken a backseat as America looks toward a new vaccine, waits for the outcome of a historic election, and watches congress stall on a new relief package.

But experts such as Gordon Chang are sounding the alarm on China’s recent efforts to subvert, and, in Chang’s opinion, outright overthrow, the US government.  Chang told The Cats Roundtable this Sunday that the China-US relationship was in an “existential struggle” that posed a “grave risk” to America’s future.

Chang’s comments arrived on the heels of December 9th report that named Democratic Representative Eric Swalwell and other individuals courted in 2011 and 2015 by Chinese national Christine Fang, as part of a ploy orchestrated by the Chinese government, as well as the news Hunter Biden, Joe Biden’s son, is under federal investigation for his business dealings in China and Ukraine.

Chang said the report on Swalwell was evidence China was “grooming a lot of Americans right now” in the hopes they would become more influential, noting China had contact with Swalwell while he was a councilman in Dublin City, California.

“We know that she had substantial contact not only with Swalwell, but with many other American political figures,” Chang told The Cats Roundtable, adding later, “All of this really is an indication that China will use any means possible to corrupt Americans, infiltrate them, influence them, and work, I believe, to overthrow the US government.”

In fact, according to Chang, the prospect of a Biden administration was being met with relief in Beijing, where officials have claimed “influence at the core circles” in Washington and were “looking forward to the return of America’s elites to the White House.”

“They just believe the United States is in terminal decline, that China can do whatever it wants,” Chang said, adding this gave China confidence to engage in a “comprehensive attack on America.”

Whether it’s in Georgia’s Republican Governor Brian Kemp, or the Black Lives Matters protests that shook the country this summer, Chang said China was looking at any opportunity it could to sow discord, and find allies here at home. Chang even suggested Chinese students at American universities and colleges were compromised by China’s data-collection and national intelligence laws.

“The question is China is overwhelming the FBI and the American law enforcement, the CIA, and we just can’t keep up, because there are so many different ways that China can use money, or the prospect of money, to influence Americans,” Chang explained.

Ultimately Chang called on Americans to face “China’s challenge” as it seeks to sow discord abroad, comparing the act of subversion he believes under-gird the violence and protests this summer to an “act of war.”

“China’s challenge at us is fundamental across the board, and we better start defending ourselves, or we’re not going to have a republic,” Chang warned.

Alan Dershowitz: Trump Needs “Perfect Storm” To Turn Election Results
Comment
Peter Navarro - What went wrong with the election
This site uses cookies. By continuing to use this site you agree to our use of cookies: Find out more.