House Minority Whip Steve Scalise: Relief Package Is a Matter of Life or Death for Businesses 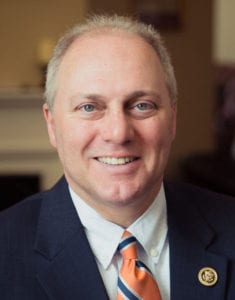 This past Friday, President Donald Trump signed a $2 trillion dollar economic stimulus bill,  rolling out financial relief for millions of Americans, reeling from the coronavirus pandemic.

House Minority Whip, Steve Scalise, joined The Cats Roundtable to give details about what Americans can expect from the stimulus package, and the partisan hurdles lawmakers faced to pass it.

Trump’s signing capped a roller-coaster week in Congress, with the bill initially stalling in the Senate as Democrats called certain provisions of the package “deal breakers”.   The stimulus bill was originally slated for approval on Monday, but became deadlocked after Democrats debated the fine print, until Wednesday.

Scalise told The Cats Roundtable that lawmakers had come together to fulfill their obligation to the American people, but criticized the delay, which caused stock markets to shudder after recovering some of the losses from the previous week.  Scalise said that Democrats, especially leaders like Nancy Pelosi, put at risk the “working relationship” that lawmakers from both parties have forged to take on the pandemic.

“This is the time for people working together to focus on specific things that need to be done to help businesses stay afloat that are literally hanging on by a thread,” Scalise told The Cats Roundtable.  He railed Pelosi for prioritizing “political games” instead of desperately needed relief to Americans, adding that it “cost us a few vital days” and the wait was “just disgraceful.”

But after public pressure mounted and Democrats drew back, Scalise was confident Congress was seemingly “back on track.”

“The relief package that’s passed now is truly gonna be a lifeline to a lot of small businesses around the country,” he explained, saying the aid was “life or death” to many American businesses.

“By and large every business owner I’ve talked to that’s hanging on by a thread, says this gives them life saving tools.”

Scalise was happy with Trump’s leadership, telling The Cats Roundtable that the President was doing a “great job” at coordinating state, federal, and medical officials to confront the virus.

He believed President Trump was speaking an uncomfortable truth when he expressed that he would like to see businesses and workers back to work by Easter.

“If it’s not that day, hopefully it’s not long after,” Scalise said.  “But I thought it was important that the President let the country know that we’re taking all the steps and precautions we can to keep American’s safe, but we also recognize that there will come a time where we have to start turning things back on.”

Scalise, who represents New Orleans, Louisiana,  also addressed the growing number of cases in Louisiana, where experts agree Mardi Gras celebrations helped fuel the spread of the pandemic.  He said Louisiana was, like New York, at the “tip of the spear” and praised health-care workers’ “phenomenal work” to confront the virus, and called the situation “just heartbreaking.”

But he is optimistic about America’s ability to support itself in dire straits, citing his own state’s history with catastrophe.

“This is when people pull together,” Scalise told The Cats Roundtable, reflecting on the horrible disaster of Hurricane Katrina as an example for how Americans pull together, not apart, in times of crisis.

“They got through it together, and they stayed strong,” he said regarding the fortitude of Louisiana residents. “And we’re going to get through this together, too.”

Previous Post Former Speaker Newt Gingrich: This is Not a Permanent Detour
Next PostFormer NYPD Commissioner James O'Neill - Protecting the people of NY during these difficult times

Former Speaker Newt Gingrich: This is Not a Permanent Detour
Comment
Former NYPD Commissioner James O'Neill - Protecting the people of NY during these difficult times
This site uses cookies. By continuing to use this site you agree to our use of cookies: Find out more.