Jeff Cathey and Ken Fisher: Give Veterans The Support and Opportunities They Need 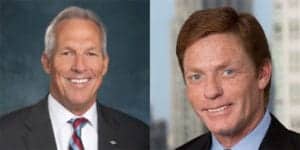 It’s Memorial Day weekend, and Americans are not letting a pandemic stop the holiday.

As the country pauses to celebrate, The Cats Roundtable is joined by Jeff Cathey and Ken Fisher to discuss what it’s like to be on the front lines in taking care of our veterans, service members, and their families.

Jeff Cathey, the head of Military and Veteran Affairs for Bank of America, and a Navy veteran himself, knows first hand of the unique strengths that veterans and members of the military can bring to the business world.

So in 2014, he helped initiate Bank of America’s 2014 pledge to hire 10,000 veterans or service members. The pledge included a number of programs designed to expose service members and veterans to the business sector, such as a network of 43 chapters and 11,000 employees across the country.

To Cathey, the importance of programs, like BofA’s, are heightened in the current pandemic, specifically due to the economic fallout caused to veterans. With 200,000 service members leaving the military each year, Cathey is looking to see how he can provide more resources to help veterans and their families start businesses.

“About 10 percent of them want to start their own business,” Cathey said. “They’ve taken orders for many years, and now they want to give orders, and really lead their own trajectory.”

Cathey also noted the close relationship Bank of America has had with contributing to veteran housing through the Fisher House Foundation since 2007. Fisher House, in conjunction with the Intrepid Fallen Heroes Fund, created the Center for the Intrepid in San Antonio, Texas, a state-of-the-art facility to rehabilitate and treat members of the military with traumatic injuries.

The Intrepid Fallen Heroes Fund also assists the families of U.S. military personnel killed in action, often working in conjunction with Fisher House. Founded in 1990 by Zachary Fisher, Fisher House has built 87 houses and assisted almost half a million families of hospitalized service members and veterans around the world.

Ken Fisher, CEO of Fisher House, told The Cats Roundtable that he hopes Americans will think of the great sacrifices made not just by service members, but by their families as well.

“The most important thing I think we need to remember is that behind every man and woman that wears a uniform, there’s a family. And that family makes sacrifices and bears burdens the average American has no concept of,” Fisher said.

For instance, at Dover Air Force Base in Delaware, where fallen military personnel are first repatriated back to the United States, there was no formal protocol to house or assist gold-star families coming to attend the ceremony.

Fisher called this a “travesty” and not “indicative of the sacrifices this family made.” He decided to act, and by November, 2010, Fisher House had built a home at Dover along with a non-denominational spiritual center. The house has since boarded 3,700 families in the ten years it has been open.

While Fisher called the job “bittersweet,” he pledged that it was the obligation of organizations like Fisher House to “remind people that these families need help sometimes, too.”

Former PA. Governor Ed Rendell: Presidency “Will Be Tough Job for Anybody”

Admiral James Stavridis: A Pretty Big Message for Memorial Day
Comment
Nicole Gelinas - City employee numbers jumped
This site uses cookies. By continuing to use this site you agree to our use of cookies: Find out more.