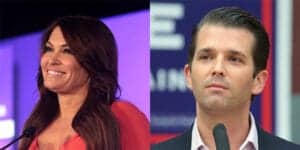 Less than three months until the November Presidential election, and President Trump’s campaign is in full-swing, with voices like Kimberly Guilfoyle and Donald Trump Jr.’s touring the circuit and whipping up support among a population who they say are fed up with the state of the country and the state of politics.

Speaking from the campaign trail, Guilfoyle and Trump told The Cats Roundtable about what they were observing on the ground, and why they believe the silent majority will again give 2020 to Trump the same way they did in 2016.

Through the back roads of Pennsylvania, the Trump signs are blooming, Trump Jr. said.

“I think there’s going to be another one of those ghost-to-vote scenarios that we saw play out in ‘16 right now,” he told The Cats Roundtable.

Guilfoyle added that they were “taking the fight” to the Democrats in places like Pennsylvania, which voted for Trump in the 2016 election, but remains an important battleground state. She told The Cats Roundtable that many battleground states would be “hit hard by a Biden Presidency,” calling the Democratic Presidential nominee a “paycheck collector” who has killed jobs for American workers.

On the other hand, Guilfoyle called Trump the “authentic” candidate, in tune with hard-hit communities where jobs have been threatened, shut-down, or exported.

“Joe phony Biden pretends that he’s a moderate, when he’s not. He’s radical left, and he doubled down on his true identity in putting forward Kamala Harris as his VP pick,” Guilfoyle explained.

Trump Jr. said that the people he meets tell him his father is the first to push back against the growing illiberality of the Democratic party, an illiberality both Guilfoyle and Trump Jr. believe has created an increasingly left-wing platform that will “destroy big business” along with the “suburbs of America.”

With cities flaring under the flames of civil strife, Guilfoyle and Trump Jr. blamed Democratic policies and leaders for the lack of safety many citizens are feeling. They pointed to the protests in New York, the riots in Portland, and the looting in Chicago as examples of cities left “unrecognizable” in light of Democratic leadership. Trump Jr. told The Cats Roundtable that voters outside the city can recognize the unrest is not just an “anomaly of the cities.”

“These policies are asinine,” he told The Cats Roundtable. “They get to destroy our cities in the process…It’s like a parody—if it wasn’t so scary and sad.”

With a mostly hostile mainstream press, the partisanship within mainstream news media, and social media taking steps to “suppress” conservative views, both Trump Jr. and Guilfoyle recognize that it’s not going to be an easy fight until November.

But just as 2016, they believe Democrats and commentators are putting the cart before the horse.

John Catsimatidis · Kimberly Guilfoyle & Donald Trump Jr. 8-16-20
Previous Post Rudy Giuliani: Trump Will Get This Country on a Track of Law and Order
Next PostLawrence Mandelker - Police and community support

Rudy Giuliani: Trump Will Get This Country on a Track of Law and Order
Comment
Lawrence Mandelker - Police and community support
This site uses cookies. By continuing to use this site you agree to our use of cookies: Find out more.