Representative Scalise: “Game-changer” Vaccine Could Come in a Few Weeks 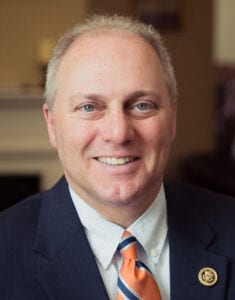 This past week Congress shifted into high gear to pass a second coronavirus relief bill, and the Trump administration awarded a $3 billion contract to Pfizer and a German biotech firm to deliver over 100 million doses of a coronavirus vaccine.

The news from Washington coincided with a rise in coronavirus cases in much of the nation as the school season approaches, raising concerns about plans for opening in-person classrooms. Minority Whip, Louisiana Congressman Steve Scalise, sat down with The Cats Roundtable to give an update on what he and other lawmakers are doing to ensure Americans can return safely to their pursuit of the American dream.

Scalise told The Cats Roundtable that he has been focused on creating, organizing, and implementing the safety policies for kids and teachers returning to school, and called both sides of the aisle to “come together” on the issue.

“My focus has been on helping people to safely reopen,” Scalise said. “I’ve been watching closely the safety protocols for reopening schools—I think this is really, really important that we get this right.”

While much of the debate has been on the risk of children returning to school, Scalise cited the American Academy of Pediatrics study on the reopening of schools and the importance of in-person education.

“Over 50 million children in this country are counting on us to get this right, because when they’re not in that school environment, there’s a negative cost to those children,” Scalise said.

As Congress moves towards the passage of a new aid package, which includes money for schools to assist in reopening, Scalise said he was concentrated on bringing Americans across the country back to their pre-pandemic opportunities.

“We want to make sure that we get back to having the opportunities for families again so that they’re not worried about whether they can pay their rent or their mortgage, where they see that same bright career opportunity for them and their families again,” Scalise told The Cats Roundtable. We’re not there yet, but I really do think in the Fall, that’s where you’re going to see a big shift in focus.”

While infection rates are growing in much of the country, Scalise pointed out that the medical system now has five months of experience fighting this virus, and deaths remain relatively manageable. With President Trump signing Operation Warp Speed, more widespread safety protocols, as well as repurposed drugs such as Remdesivir able to cut a patient’s hospital stay by a third, Scalise said the U.S. is beginning to get ahead of the virus.

Scalise told The Cats Roundtable we “have never been closer” to discovering a coronavirus vaccine.

Two dozen vaccine ideas are in the midst of human trials, something nobody would have predicted six months ago, and Scalise said he knew of “three different drugs” that “could very well get approved by the FDA in the next few weeks.”

He praised President Trump’s push for a vaccine as “nothing short of remarkable,” accelerating the search by putting “the weight of the Federal Government” into making the hunt for a vaccine “top priority.”

Representative Peter King: America Rises to Meet Every Challenge
Comment
David Bahnsen - Optimistic view to reopening. Not as bad as it seems.
This site uses cookies. By continuing to use this site you agree to our use of cookies: Find out more.