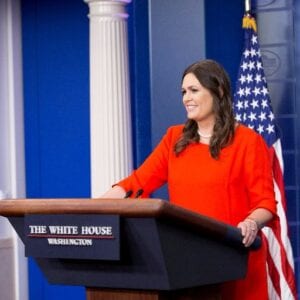 Nobody would argue that President Trump, even before he was elected in 2016, has courted controversy. From the best-seller lists to the top of the network ratings, the President has been targeted relentlessly by commentators, former associates, celebrities, and opponents, with nearly every scandal thrown his way failing to stick.

Former White House Press Secretary Sarah Huckabee Sanders joined The Cats Roundtable to give a different point of view on the President, one that doesn’t fit the usual media narrative.

“There’s definitely, I think, a lot of stories you’ll never hear in the mainstream media,” Sanders told The Cats Roundtable, ahead of the publication of her book Speaking For Myself: Faith, Freedom, and the Fight of our Lives Inside The Trump White House. Sanders explained that she was hoping to give a truer account of the President than the books released ahead of the election.

Since being elected, tell-all books on the President have been easy fodder for a mainstream media hungry for stories that paint the President as a pariah. Upcoming releases, such as one from journalist Bob Woodward, as well as one from former Trump lawyer, Michael Cohen, have already taken headlines even before the ink has dried.

But, Sanders said, if readers want a real take on Trump, her book presented a “true account of who this President is, how much he loves this country, and how he’s fighting every single day to make it better.”

Sanders noted to The Cats Roundtable that Trump was, and continues to be, the best answer to a political atmosphere that continues to favor gridlock over compromise. She spoke personally about Washington as a “total warzone,” adding that it was up to voters to “make sure Donald Trump wins.”

Sanders’ certainty in Trump echoed the increasingly polarized directions she perceives the parties have in store for the country, a polarization she witnesses first hand.

“We have two choices right now,” Sanders explained. “We can either have the path of prosperity, safety, and security, and a president who believes in law and order—or we can go down the direction that will be completely controlled by the liberal mob and the radical left with Joe Biden.”

Since stepping down as White House press secretary, Sanders has strongly emphasized the high stakes choice this election, calling the 2020 vote the most “critical to the future of our country.”

As the days to November 3rd tick down, Sanders told The Cats Roundtable that the upcoming Presidential debates would be “very critical for the President,” but also for Biden as well, condemning the suggestions of some top Democrats that Biden should skip the debates altogether.

Sanders said she believed Biden flowed “with the political wind,” and that wind has blown far to the left. She echoed the President when she said that Biden and moderate Democrats would be mouthpieces for a radical base in the Democratic party.

“That’s why I think this election is so critical and why it would be so dangerous and detrimental for our country if he were to win,” Sanders said about Biden.

Sarah Huckabee Sanders - There from the beginning, the Trump White House.
Comment
Newt Gingrich: This Is an “All Out War”
This site uses cookies. By continuing to use this site you agree to our use of cookies: Find out more.