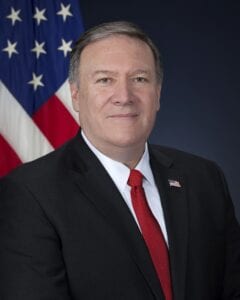 A Russian build-up on the Ukrainian border. Iranian promises to increase uranium enrichment.  Chinese hacking of US infrastructure.  North Korea’s renewal of its nuclear missile program.  America’s policy of walking softly but carrying a big stick is being put to its biggest test under the Biden administration., As American adversaries toe the line, former Secretary of State Mike Pompeo is one person who perhaps epitomized Roosevelt’s philosophy best in how he enacted US prestige around the world.

“What you’re seeing happen in each of these places around the world is a result of tests on this administration,” Pompeo told The Cats Roundtable on Sunday.  “They’re seeing how far they can push America under the leadership of President Biden.”

And while Biden has pushed back strongly on Russia in recent weeks, including the expelling of Russian diplomats, Pompeo noted the Biden’s focus on Russia betrayed the short-sight of their priorities.

“The greatest threat overtime to the United States of America remains the control of the authoritarian, Marxists in China,” he told The Cats Roundtable.  “Now we’ve seen how they invade our telecommunication infrastructure and then unleash a virus on the world, and cover it up.”

Pompeo spoke strongly against the arrest of Hong Kong “freedom-fighters” by the Chinese government, as part of their crackdown on democracy in the semi-autonomous city.

“This is tragic, it’s bad for the people of Hong Kong, but it’s bad because every person living in mainland China sees this and knows this is the direction of travel for Xi Jinping and his cronies in the Chinese Communist Party.”

In the Middle East, Biden’s foreign policy unwittingly stepped into a blunder this week, after Iran promised to ramp up its levels of uranium enrichment after a power-outage they blamed on Israel.  The rising tensions between Israel and Iran come on the eve of renewed talks over the Obama-era nuclear deal between Biden and Tehran after President Trump withdrew from the agreement.

Pompeo noted the confidence Israel had in the US under the Trump administration.

“They’re watching an American administration that is very different from the one I served in,” he told The Cats Roundtable. “This administration appears, even today, prepared to appease the Iranians on some theory that says if you’re just nice to them, they’ll start behaving.  There’s just no evidence that’s the case.”

The contrast between the international perception of the Trump era to the Biden is night and day.  While reigning back constant international threats like Iran and North Korea, his refusal to kowtow to the status quo scandalized him to her European allies.  That perception reached ahead as the pandemic hit the US hard in 2020, but as the US aims for recovery in 2021, Pompeo called for a “global solution,” but noted Europe is lagging behind.

“Looks like the Europeans have gone to a status model where their response to the virus is to lock down and close things up,” Pompeo told The Cats Roundtable. “That is not healthy, that is not good, it will create more risk long-term for the people who are living there.”

Larry Kudlow: If It Ain’t Broke, Don’t Fix It
Comment
Larry Kudlow - A tax raise will dampen the recovery.
This site uses cookies. By continuing to use this site you agree to our use of cookies: Find out more.