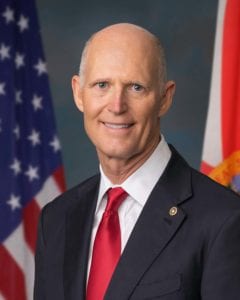 The May Job Report unemployment rate fell to 13.3 percent as many Americans returned to work since stay-at-home orders around the country eased. On The Cats Roundtable this past week, Florida Senator Rick Scott said that the drop in unemployment reflected people’s eagerness to “get this economy going again.”

But as the economy begins to shake off the pandemic, Scott pointed to the Blue States that still asking for bailouts off the backs of taxpayers from other states. To Scott, to get Florida to pay for states like New York, New Jersey, or Illinois’ excesses is simply “not right.”

“We’re covering all their costs for coronavirus. We’ve given them grants, or lending over a trillion dollars, and that’s actually about what they collect in taxes for all the states.” Scott explained.

He said that if the Red States are capable of thriving within their means, then the Blue States should be expected to do the same. “Think about this: they’re taxing somebody, or they’re borrowing something, so future generations are going to have to pay for it—we can’t keep doing that. It’s not fair.”

While the economy is reopening, Scott explained that the way we do business has to also change, especially in regards to China.

Scott sees China’s reckless suppression of the seriousness of the coronavirus as a part of Beijing’s long-game to enter into a new “cold war” with the U.S.

“They’ve been taking advantage of us, for decades,” Scott said. “Everything you can think about that China might be doing—hacking our systems, trying to infiltrate our elections—they’re doing it. They want to dominate America.”

He called for a boycott of products made in China in favor of American companies, as well as higher accountability for Chinese companies that do business in the U.S. who, in turn, take “bank from American investors.”

While Scott is thankful for President Trump’s actions to limit China’s sphere of influence, he called on Americans to stop buying their products because it will “have a bigger impact than any law we can pass.”

“We ought to try to buy everything we can in America,” he said. “It’s better if you buy an American product because you help an American worker.”

All that said, the threat from China is not just economic. Scott praised Trump’s dynamic understanding of the threat, including the President’s creation of the Space Force to protect American interests in the last frontier, where Scott says China is looking to “hurt Americans” by disrupting or shutting down our GPS and surveillance satellites.

Ultimately, Scott told The Cats Roundtable that he was “excited about the future” despite the challenges ahead.

John Catsimatidis · Senator Rick Scott 6-7-20
Previous Post Dr. Anthony Fauci - The Country is getting control of the virus.
Next PostDr. Fauci: “Cautiously Optimistic” We Have Flattened the Curve

Dr. Anthony Fauci - The Country is getting control of the virus.
Comment
Dr. Fauci: “Cautiously Optimistic” We Have Flattened the Curve
This site uses cookies. By continuing to use this site you agree to our use of cookies: Find out more.