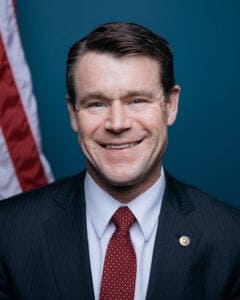 While the presidential election results continue to fight it out in the courts, attention has turned to the Senate, and more specifically to Georgia, where Democrats hope to tip the balance of power in two run-off Senate elections.

Indiana Senator Todd Young joined The Cats Roundtable that he was “really optimistic about the future of this country” and was “in great spirits” about the GOP’s chances in the run-off, where GOP incumbents Kelly Loeffler and David Perdue are facing well-funded Democratic challengers.

With so much on the line this election, the precautions to make sure the January vote in Georgia has taken on national scrutiny.  With Democratic control in the House all but cemented, and a potential Democrat in the White House, Young said that if Democrats get a majority, they will attempt to push a far-left agenda.

“Chuck Schumer will rush through whatever the far-left of his party, which has sort of hijacked the agenda, wants,” Young said, adding that a Republican senate would check any unilateral legislation from the Democrats.

“A Republican Senate will prevent things like people losing their on the job insurance, and middle-class Americans seeing big increases in their taxes,” Young explained.

Young, as leader of the Republican Senatorial Committee, told The Cats Roundtable that he and the RNC had enlisted the assistance of republican attorney generals from around the country “who are vigilant election law experts” to identify “soft spots in Georgia’s election laws.”

Young and Republican’s concerns about the integrity of the election come on the heels of the widespread controversy regarding the results of the November 3rd election, with the President and his allies filing lawsuits to dispute the results, citing voter irregularities.

But Republicans aren’t the only ones setting their sights on Georgia, and trust in the election results is not on everyone’s agenda.  Young dismissed calls like those from Andrew Yang for Democrats in other states to take advantage of Georgia’s residency requirements, which Young called “incredibly loose.”

While it may seem ridiculous, Young said that it showed “there are limitations to what can be done in terms of cracking down,” though emphasized the Secretary of State of Georgia indicated he would not tolerate election interference.

As for the use of Dominion Voting Systems, which has become one of the primary focuses of the Trump’s campaign’s attempts to dispute election results, and which are used in some counties in Georgia, Young said he was not “privy to the facts” coming from Trump’s lawyers, but said he would “welcome more details.”

With Georgia’s run-off election predicted to bring in record-breaking numbers for early voting, and unprecedented volumes of absentee ballots amid the pandemic, Young said that while some kinds of voting “really benefit one party over the other,” he remained optimistic ahead of Thanksgiving.

“I’d like the American people to be encouraged,” Young hoped. “This is the greatest nation on earth, and hope will not be lost as long as the American people remain great. I just want to encourage people, encourage them to count all of their blessings, and God will continue to watch over this great nation, and I’m just proud to be playing a small part in its leadership during this important moment in history.”

Pamela J. Newman - New book “Leadership is Doing”
Comment
RNC Chair Ronna McDaniel: We Need an Election Overhaul
This site uses cookies. By continuing to use this site you agree to our use of cookies: Find out more.