Steve Bannon: Step Up and Make a Play 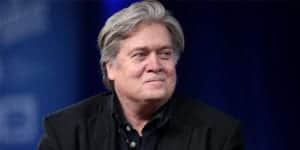 Stephen Bannon called in to The Cats Roundtable this Sunday to sound off from the Athens Democracy Forum that occurred this weekend.  He offered his take on new developments about US trade talks with China, corporate pullback from the Hong Kong protests, and the impeachment inquiry into President Trump.

In regards to his debate with philosopher Bernard-Henri Lévy this Saturday, Bannon sees the world struggling between two ideologies: globalism and nationalism.

“When globalists were winning elections, they didn’t complain,” he told The Roundtable, but with the election of populist leaders around the world, these globalists claim that “all of a sudden, democracy’s in jeopardy.”

He feels this fear among global “elites” stems from the fact that “people are starting to get out to vote and they’re getting awakened to what the reality is.”

One of the main Rorschach tests of this nationalist vs globalist debate is the ongoing anti-Mainland protests in Hong Kong, which are now having economic consequences for American businesses.  With the announcement this past week, Chinese sponsors of the Houston Rockets would pull funding from the team after a Rocket executive posted a tweet in support of protesters in Hong Kong.

“You saw the NBA genuflect to the Chinese Communist Party,” Bannon said, citing the multiple, conflicting statements from the league.  Bannon also criticized “the woke NBA” for its distancing from social issues “because of money,” calling it an “outrage that American citizens would do this.”

Bannon cited the treatment of ethnic and religious minorities such as the Uighurs, Tibetan Buddhists, Chinese Catholics, and the Falun Gong, as evidence “for what a dictatorship” China is, warning “the American people better awaken to this threat.”

“Do you think that the Chinese are afraid of an Arab Spring?” Catsimatidis asked Bannon.

“That’s why they’re coming down so hard on Hong Kong,” Bannon concurred.

“The Chinese Communist Party is absolutely paralyzed in thinking that this contagion could spread to mainland China,” he explained, calling the Hong Kong protests an “inspiration.”

Bannon shared with The Roundtable that he takes the White House’s announcement on Friday that preliminary agreements have been made between China and the United States on phase one of a three-phase trade deal as a good sign, but admits he was “maybe a little disappointed.”  Believing the announcement “shows at least some progress,” he notes the good numbers on Wall Street this Friday after the President’s announcement.

With his final thought, Bannon expressed to The Roundtable how he approaches the impeachment inquiry into President Trump, believing the President’s team “needs to step up and make a play here.”

“This impeachment situation I think every day spirals a little more out of control,” he told Catsimatidis.  “I’m very worried about the numbers.”

“I think the President’s going to have to rethink his legal team,” he added, “rethink his media team, rethink the way he’s going about this—because right now, the numbers are going the wrong way.”

“If we want the 2016 election to be overturned, trust me, Nancy Pelosi wants to overturn it,” he admonished listeners.  “And she will use the mainstream media as her weapon to overturn the election of Donald Trump.”

William Parker - Withdrawal of American troops leaves Kurds at mercy of Turkey.
Comment
Dr. Peter Michalos - No one takes into account carbon footprint of battery-powered cars
This site uses cookies. By continuing to use this site you agree to our use of cookies: Find out more.