Bruce Mosler, Colonel Jack Jacobs, and Ken Fisher: Our Duty To Support Troops Beyond The Uniform 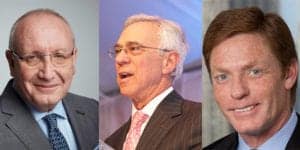 239 years after the initial signing of the Declaration of Independence, this Fourth of July is one for the history books. Despite half of the states pulling back on reopenings as the coronavirus surges, Americans across the country are marking the date with reflection and celebration for those on the frontlines, both here at home and abroad.

The Cats Roundtable was joined this Fourth of July by Bruce Mosler of Cushman & Wakefield. Colonel Jack Jacobs, and Ken Fisher of Fisher House on what this day means to them, as well as why supporting our veterans, service members, and their families extends beyond their time in uniform.

Fisher told The Cats Roundtable that, to him, the Fourth of July is “more than just a birthday.”

“It’s a recognition of those who served this nation in uniform” he reflected. He explained that he saw the work he does at Fisher House as a duty, calling it “a privilege to be able to do some small part” for the troops.

Founded in 1990, Fisher House provides a “home away from home” for the families of hospitalized military members, with 90 houses built around the world and over half a million families served.

“The military family makes so many sacrifices and bears so many burdens that the average American has no concept of; they serve, too,” Fisher said.

Colonel Jacobs, a Medal of Honor recipient, commentator, and investor, called the Fourth of July the “most meaningful holiday on the calendar.”

“Everything positive that has happened in this country traces its root to that day,” Jacobs said. “On this day, we focus on the birth of this nation, and everything it has come to mean.

He reminded The Cats Roundtable that Americans can trace their origins to other lands, coasts, and continents, and called it “a magnet for the oppressed people from around the world.”

Jacobs also explained why the military is a microcosm for the diversity of the United States.

“You can’t get a better cross-section of what this country is than to go to any place where people are in uniform,” Jacobs said. “You take a slice of the military, and there you will see America.”

Both Fisher and Jacobs this Fourth of July see America currently striving to live up to the ideas that it both was founded upon and is heir to.

“While the playing field may not be perfectly level, the work ahead of us, I think, can be considered a renaissance if we undertake it in the proper way,” Jacobs told The Cats Roundtable.

One integral factor of this renaissance is the men and women of the United States military themselves. With 200,000 service members leaving the ranks each year, Fisher and Jacobs believe it’s time for corporate America to tap into an essential resource for America’s workforce.

Jacobs noted that military personnel are working with some of the most state-of-the-art equipment in the world, and in addition, they are learning traits that translate into the business world, such as working on behalf of the group before themselves.

Fisher agreed with Jacobs, and applauded military personnel’s “warrior ethos” as “the finest this country has to offer” and are “capable of really anything.”

“I think that it’s up to corporate America not just to hire them for the sake of hiring them, but hiring them for what they bring to the table,” Fisher said.

He added that it is the role of corporate leaders to have the courage to listen to the experiences of veterans, in part to find them a job best suited to their talents.

Both Fisher and Jacobs agree that the fight for veterans rights has come a long way, with Fisher saluting Jack Jacobs and other veterans for his work in bringing about that change.

“They’ve turned what was a very negative experience into making lives better for those that came after them” Fisher said.

Bruce Mosler, Colonel Jack Jacobs & Ken Fisher - July 4th Special - Part 1
Comment
Dr. Oz: On Virus Resurgence, Masks, and Vaccine News
This site uses cookies. By continuing to use this site you agree to our use of cookies: Find out more.