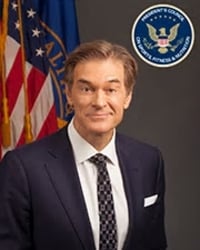 Dr. Oz told The Cats Roundtable that he was “struck by the pessimism” surrounding the coronavirus resurgence, and wanted to highlight the facts of the situation to help give people a better perspective on what to do about the resurgence.

President Trump and other commentators have pointed to an increasing number of coronavirus tests as an explanation for the recent surge, but though Dr. Oz is skeptical of the numbers overall, he said that “the surge is real,” but noted that while infections have increased, deaths have been decreasing across the country.

Looks may be deceiving, however, and as cynical as the numbers may be, the official number of deaths due to the coronavirus doesn’t tell the whole story.

Dr. Oz pointed out that the overall tally of coronavirus deaths is “muddied” because it includes those who didn’t have Covid-19, rather than those who “died because of the pandemic.”

The big concern has been that many people facing health issues, such as heart-disease, have opted out of visiting the hospital, and that many continue to off-put care before it’s too late.

But Dr. Oz added that the demographics of those infected by the virus has changed, with the median age of a person infected falling to the mid-thirties.

“I don’t think it’s because of testing,” he said. “I think the major reality is that young people began to revolt.”

The implications of this change is significant. With many ICU’s and medical facilities reaching or near capacity, the younger age of those infected could “give a little bit more breathing room” to hospitals. He also added that there have been breakthroughs in the critical management and treatment of severe cases of the virus, especially with repurposed medications that have been shown to fight the virus, such as Remdesivir.

As America reckons with a resurgence in the virus, Dr. Oz has looked around the world to examine what has happened in the U.S. He told The Cats Roundtable that we can learn from the success of other countries at tamping down the virus to “grab back the power and control” over the pandemic.

He said that it was urgent to take back the reins from the virus. Whether it be retirees and grandparents watching their golden years tarnish in isolation, or the incalculable damage of millions of children barred from their education, Dr. Oz sees the struggle everywhere. While he admits the response to the virus may have been a “good medical recommendation,” it didn’t take into account the larger social issues it stopped in its tracks.

Dr. Oz believes though, that the good news is that we already have more control over the situation than we think.

“The emotional and mental health challenges that we’re facing can be addressed because we’re the safety net for each other, we always have been,” he said, adding that if we create a “reduction in the total number of new cases” like Europe we can see a reversal.

He urged that as Americans we need to rise above the partisanship behind the personal choice to wear or not wear a mask.

“We ought to rebrand masks,” Dr. Oz said. “Masks aren’t about the government bossing you around. Masks are about being kind to your fellow man.”

He also reminded The Cats Roundtable that the CDC has said standing 6 feet for 15 minutes or less has shown not to create much exposure to a potential virus. Along with the humid air of the summer, Dr. Oz echoed other medical experts when he said that people who go outside have low risk of transmission.

Dr. Oz told The Cats Roundtable that with dozens of candidates in trial, he was “very optimistic of the vaccine scenario” for the beginning of 2021.

With the urgency for a vaccine increasing every day, many are beginning to discuss the very ethics of vaccination trials. In the case of the coronavirus, the idea of accelerating the process through human tests has grown louder.

With the need for a vaccine sooner than later, Dr. Oz pointed out that time is of the essence.

“Saving six months of clinical trials would mean that many more lives would be affected by having the vaccine,” Dr. Oz noted. “Especially the vulnerable members of the population.”

Bruce Mosler, Colonel Jack Jacobs, and Ken Fisher: Our Duty To Support Troops Beyond The Uniform
Comment
Dick Morris - Biden has become a puppet of the far Left.
This site uses cookies. By continuing to use this site you agree to our use of cookies: Find out more.