Corey Lewandowski: Trump Has Built It Once, “We’ll Build It Again” 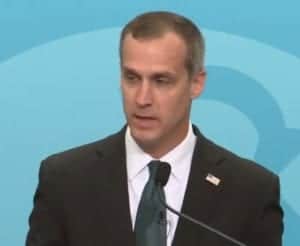 Attention for most of the past week has focused on the President’s Saturday campaign rally in Tulsa, Oklahoma, but eyes are increasingly glued to the presidential election this upcoming November. While protests and unrest have spread across the country as it attempts to reopen amid a global pandemic, many are wondering if the President is listening to what the average American finds important.

“I think the number one issue is electing a president who can turn our economy back on,” Lewandowski said.

According to Lewandowski, Trump has delivered on his campaign promises, and pointed to the record-breaking job numbers before the pandemic.

“Donald Trump, in his first few years, took 2.5 million Americans and lifted them out of poverty,” Lewandowski explained.

As the country gradually eases back to pre-pandemic production, Lewandowski believes that the bottom dollar is on the minds of most Americans. He pointed out the need for a leader who understands the business side of things.

“We need somebody to force our country open again and allow Americans back to work,” he said. “Donald Trump built it once, we’ll build it again.”

While he believed Presidential platforms like national security and jobs will remain a top priority, Lewandowski believed Trump’s ability to appoint court judges would be a major reelection point, calling it “critical to the future of jurisprudence in our country.”

He noted Trump’s widespread appointment of judges in the lower courts, and said that it would continue in a second term, telling The Cats Roundtable that appointing fair judges was important because “liberals have used the court as a cudgel to stop this President.”

As unrest continues in many cities, Lewandowski said that the President’s strong stance on law and order appears in stark contrast to Democrats’ support for calls to defund the police.

While the President has pressed for reform, he has shown an unwavering support for law enforcement.

Lewandowski said protesters demanding the defunding of the police is a “complete fallacy,” but did emphasize that the President was calling for more training and accountability to be put in place.

“When people go over and above that level of force that’s required, there needs to be accountability, and we’re seeing that now because of the tragic death in Minnesota.”

Corey Lewandowski - Trump campaign going well. Resuming rallies.
Comment
Rudy Giuliani: President Can Fire U.S. Attorney If He Wants To
This site uses cookies. By continuing to use this site you agree to our use of cookies: Find out more.