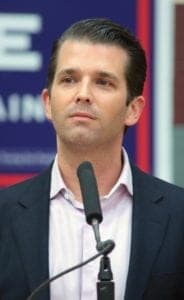 Donald Trump Jr. checked in with The Cats Roundtable to discuss the release of his new book Triggered this week and share his take on the media and “woke culture”, why President Trump’s policies are working for all Americans, as well as what he hopes readers and listeners can learn about his family, his politics, and his story.

Following his viral appearance on The View last week, Trump Jr. said “it was about time” to “push back.”

“They invited me, John, to go talk about my book Triggered,” he told Catsimatidis, adding that they failed to discuss the book. “I’m not naive, I’m not a little kid,” he said about the appearance, confiding he knew “they were going to be vicious.”

“The book’s title is exactly what I did to them,” he admitted and said his appearance on The View is another example that there’s a “double standard” in the media.

“I’m only playing by their rules,” he said, but noted by the end of the appearance most of the audience in the studio had “changed the tide” and in the end things had “worked very well in our favor.”

Donald Trump Jr. tells The Cats Roundtable that though he’s touring for his father President Trump’s 2020 reelection campaign, he’s still involved in the family business, but says “unlike Hunter Biden,” he and his family have forfeited new international business deals.

By giving up these new business deals, he imparts to Catsimatidis the free time allowed him to get “heavily involved in politics” and engage with President Trump’s policies.

“I see the results of what his administration is bringing to everyday hard-working Americans, the Americans he campaigned for,” he remarked to The Cats Roundtable, adding all Americans, even those who didn’t support the President, have benefited from President Trump’s policies.

“Everyone is winning from this economy, and I want to see that continue because I love my country and I love the people in it,” Trump Jr. said.

Currently, on a national book tour, Trump Jr. says he hopes readers can learn about his family and the details of his ideology. He discussed his book Triggered, highlighting his mother’s escape from communist Czechoslovakia, as well as his grandparents’ time in bread lines. He also discusses Triggered’s origins on the midterm campaign trail and his recent push back during the “Mueller hoax.”

“I was the number two target,” Trump Jr. told The Roundtable, saying his book explains why he and other conservatives are fighting against a “socialist push” that he feels has infiltrated Democratic policies.

Trump Jr. reflects that “a woke culture” has replaced moderate Democrats, explaining that after 2016, Democrats felt they needed to embrace radical fringes in the party.

“If you don’t go far enough, if you don’t go crazy enough—that’s the problem, you see this run toward this insanity, and there’s no adult in the room anymore,” he shared with Catsimatidis.

“You just have to constantly try to figure out who’s the craziest guy, and whatever he says is woke, and that’s the gospel of the day.”

Toronto Mayor John Tory: Toronto Welcomes the Talent
Comment
Rabbi Meyer May - Frightening rise in antisemitic crime. Israel has a great friend in Trump.
This site uses cookies. By continuing to use this site you agree to our use of cookies: Find out more.