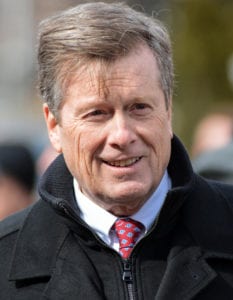 Toronto Mayor John Tory joined The Cats Roundtable to highlight the success of Canada’s largest city this Sunday, including Toronto’s approach to dealing with sustainability, immigration, homelessness, and how to square the growth of companies like Uber and Airbnb.

Mayor Tory is unambiguous about the root of Toronto’s growth. “I think the key to the growth has been immigration, frankly,” Tory admitted to Catsimatidis, adding Toronto’s “welcoming policy” includes a fast-track visa program to meet the needs of businesses, as well as a post-graduate visa program for international students.

“It’s happened many, many thousands of times that people who came to study may have intended to go home,” Tory explained, “but end up staying in Toronto, and working for the two or three years, and then making their whole lives in Toronto.”

With 80,000 a year moving into Canada’s largest city, Mayor Tory says the vetting process for migrants is up to the challenge.

“Immigration built Toronto, and build Canada,” he told The Cats Roundtable.“51 percent of the population of the city of Toronto were born outside of Canada.”

He also cites Toronto’s higher education system for churning out a talented pool of graduates in technology and the sciences, making Toronto a leader in innovation and causing a surge of international and domestic investment into the city, including a recent deal with Sidewalk Labs, which is owned by Google, to create a center of urban innovation.

“What we had was a competition as to how a very valuable piece of land on our waterfront could be used in a way that was innovative,” Tory told The Cats Roundtable. “Not just one more building, or one more condominium.”

“Their intention and ours is to have a center of urban innovation,” he said.

The Mayor also attributes the success of Toronto to his administration’s ability to lower property taxes while creating a budget surplus.

“I just think right now there’s a great challenge of affordability in cities,” Tory admitted. “And I know it’s true with the U.S. as it is in Canada.”

With urban job dislocation, the replacement of manufacturing jobs with lower income, a rising cost of living, the Mayor imparted on The Cats Roundtable, “People are struggling, a lot more than say, 25 years ago.”

“I made a commitment when I first ran 5 years ago for office to limit the property tax increases to the rate of inflation and we’ve kept that promise 5 years in a row.”

“We’ve accompanied a balanced budget—actually a surplus budget every year for 5 years—and an inflation only tax increase with record investment in transit, in affordable housing, in social housing,” Tory noted.

As for how Toronto is dealing with companies such as rent-share Airbnb and ride-share Uber, Tory says their approach has been to regulate the companies fairly with competitors, including safety inspections and minimum insurance requirements for Uber drivers, similar to the cab industry.

The city’s policy on Airbnb though has been “fairly strict.” “Homesharing is something that’s a reality with the technology of the 21st century,” he admitted. “If you want to rent out your house on a Airbnb basis under Toronto’s regulations, you have to own the house and live in it.”

Mayor Tory also confides in Catsimatidis, saying that as American cities, Toronto has a homeless problem, though notes cities such as San Francisco have more “acute” challenges. Though Toronto has an extensive shelter system, he is hoping for an increase in affordable housing.

“But if you said I come up with a magic answer to it, no I haven’t,” Tory told Catsimatidis.

“We realize that the solution to this is largely found in the supply of affordable housing and I believe also in greater mental health support for people because a lot of the people who tend to be homeless sometimes have mental health issues.”

Though Mayor Tory says they haven’t “achieved perfection” in Toronto, they are “working on it,” encouraging listeners to visit.

“We welcome the talent,” Mayor Tory offered. “We have a big country with a relatively small population, so there’s lots of room for everybody, and I hope they’ll give us a look.”

Donald Trump Jr. - Triggered: How the Left Thrives on Hate and Wants to Silence Us
Comment
Donald Trump Jr.: The First Son Takes On Triggered Culture
This site uses cookies. By continuing to use this site you agree to our use of cookies: Find out more.