Ed Cox: Let’s Not Go Down This Path Again 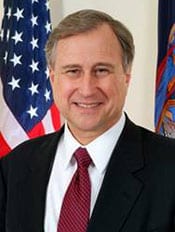 The impeachment articles of President Trump are expected to reach a vote in the Senate by the end of the month. With polls reporting little shift in support for Trump, many lawmakers view the articles of impeachment as a miscarriage of the constitution.

“This present process against the President is so partisan, so political, and so heated, yet so ineffective,” Cox explained to The Cats Roundtable.

He explained that the weight behind the impeachment depends upon the economic confidence of voters. “People outside of the beltway are not paying attention,” he said. He contrasted this reaction with the widespread support of Nixon’s impeachment from everyday Americans, and said that the current process doesn’t have a “Watergate-like frenzy.”

“Voters will feel about what’s going on with the President depending upon how well the economy is doing,” he explained.

He also described how the impeachment process itself depends upon the partisan balance in the Houses of Congress, along with voter confidence in the economy.

In Nixon’s time, Democrats had majorities in both Houses of Congress. Along with a 1973 oil embargo, subsequent recession, and double-digit inflation, voters lost faith just as the impeachment inquiry into President Nixon was getting started.

Going into 2020, the GOP has the majority in the Senate, and Senate Majority Leader Mitch McConnell has indicated the articles of impeachment drafted by the House of Representatives will be voted down,

As for whether the phone call between the President of Ukraine and President Trump at the heart of the impeachment inquiry even meets the specifications for impeachment, Cox is doubtful.

“There isn’t even an accusation of a crime here,” he said, adding that in Nixon’s case, a small-end burglary was turned into the tip of an iceberg.

Cox also cites that the cards today are stacked in President Trump’s favor, in a way it wasn’t for Nixon. “There are many different ways he can get his story out to the public that President Nixon didn’t have,” he said. Trump has direct access to a diverse media landscape that has broken down from the monolith it was in the early 1970s. From his own personal Twitter account to Fox News, the President has outlets that give him a fast track pipeline to voters.

To many, the biggest transgression hidden in the impeachment of President Trump is its distraction from a time when America’s presence across the world is both crucial and under fire. From trade issues with China to digital attacks by Russia, to heightening tensions between the U.S. and Iran, Cox believes that not only will the impeachment fail, but he believes that Nancy Pelosi and Democrats on the Hill know it can only hurt them in the upcoming 2020 presidential elections.

Larry Kudlow - Market record string of record highs. Record unemployment 3.8%
Comment
Larry Kudlow: 2020 Will Be For Everyday Americans
This site uses cookies. By continuing to use this site you agree to our use of cookies: Find out more.