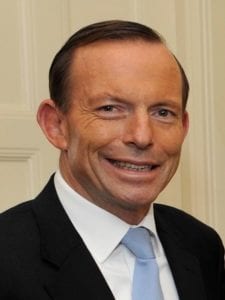 Tony Abbott, former Prime Minister of Australia, joined The Cats Roundtable to brief listeners on the wildfires in Australia, why the United States and Australia remain close in spirit, and what a new U.S.-China trade deal could learn from Australia’s relationship with China.

“I think it’s important to remind the American people, right now, of just what a great country they have,” Abbott said about his visit, which included a speech at the Heritage Foundation in Washington D.C.

He hit home, explaining why he thinks President Trump’s administration has reinvigorated American standing abroad. He noted that the death of Iranian General Qassam Soleimani in an American drone strike on January 3rd made the message of threats to U.S. security crystal clear.

“While Donald Trump has been a very unorthodox President, I think he’s been a very good one,” Abbott told The Cats Roundtable. “If you mess with America, America’s coming to get you.”

Abbot called attention to the close connection between the United States and Australia, most recently in the dispatching of U.S. firefighters to put out wildfires in Australia. “I’m very grateful for the support we’ve been given,” he said, praising the presence of U.S. firefighters.

The wildfires, raging since September, have killed 31 people, destroyed over 2,600 homes, and razed an area the size of Indiana.

As a Deputy Captain in his local rural fire brigade for nearly two decades, he said that “some of the fires we’ve seen this summer have been the worst fires I’ve experienced.”

When Abbott became Prime Minister in December 2013, he explained there were two primary accomplishments he wanted for his government.

With tens of thousands of people arriving in Australia, largely by boats from Indonesia, Abbott shut down the illegal pipeline, sending migrants back to Indonesian territorial waters.

“Australia is really the only country in the world which has successfully dealt with a large wave of illegal maritime immigrants,” he said.

His government also worked to secure better trade deals with their biggest trading partners, including China, Korea, and Japan. Since Australia has low tariffs and a very open economy, Abbott explained that the obvious result was more jobs Down Under.

The relationship between Beijing and Australia, Abbott thinks, is a good bellwether for what Americans can hope to see out of a trade agreement with China; phase one of which, was signed earlier this month.

While keeping the U.S. as its “best friend” strategically, Australia has also created a close economic relationship with China. With over 200 billion dollars a year in two-way trade between China and Australia, China is by far the country’s largest trading partner. Along with strong exports of Australian natural gas, iron, and coal, a trade surplus has led to a strong relationship between the two countries, without sacrificing Australia’s more intimate relationship with the U.S. Abbott stressed that the Australia-U.S. relationship would never be given up.

“America is a beacon of hope to the wider world,” Abbott explained, adding that the U.S. is “a powerful good in an often troubled world.”

Fred Hochberg: U.S. Needs Jobs for the Future, Not Jobs from the Past
Comment
Ray Donovan - Bail reform releasing drug offender, damages law enforcement
This site uses cookies. By continuing to use this site you agree to our use of cookies: Find out more.