Fred Hochberg: U.S. Needs Jobs for the Future, Not Jobs from the Past 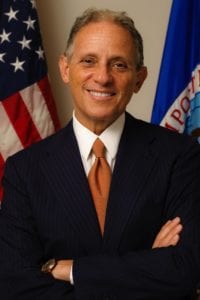 Former President of the Export-Import Bank of the United States, Fred Hochberg, joined The Cats Roundtable to untangle the knot on the economy, as well as detail the release of his new book, Trade is Not A Four-Letter Word.

President Trump has seemingly used trade tariffs against certain countries, to criticize and praise. With a new USMCA deal in the works with Mexico and Canada, and phase-one of a trade deal with China signed this month, Hochberg explains the details as the ink dries.

Hochberg says despite the criticism, Trump should get more credit for the motivations of his trade policies; particularly, China’s taking advantage of and stealing of intellectual property rights of U.S. businesses.

Hochberg’s ruling is that the President is playing the poker game well. “Donald Trump is right to call them out on that,” he said, adding “that the trading relationship needs to be corrected.”

When Roosevelt created the Export-Import Bank, the government provided guarantees to banks and companies that they would be paid in accordance with the law for exports.

“Over those 8 years, we supported about 1.4 million jobs,” Hochberg explained, adding that the overwhelming majority of the Export-Import Bank’s customers were small businesses.

“The bread and butter, the everyday business of the bank, was small businesses,” he said.

The Export-Import Bank has also allowed customers to compete with Chinese financing in a world increasingly being divided by their relationship with Beijing or Washington D.C.

Competition with China has increasingly caused concern for U.S. economy experts. Hochberg compared China’s loan system to “predatory lending,” and in places from South America to Africa, China is creating loans that can’t be paid back, allowing them to foreclose.

“Countries obviously need to be careful,” Hochberg said. “When a deal seems too good, it may just be too good.”

On the other hand, the world is in desperate need of new infrastructure, and China is all too willing to support the need. While building friends and relationships in developing countries can lead to benefits to all parties, Hochberg believes it’s America’s responsibility to make sure countries know the deals they’re getting into.

The Export-Import Bank has financed everything from power plants to water filtration systems, while creating a debt-burden that’s sustainable.

“We are an alternate source,” Hochberg said about the U.S., adding that he’s happy with the Trump administration for putting the Export-Import Bank “back in business” as an alternative source to Chinese financing.

While we’re taught that there are winners and losers in trade, a supportive system for those who lose out in global trade, so they have resources for life-stability, is something Hochberg is fighting for.

With the increasing popularity of artificial intelligence and automation in the workplace as well, Hochberg believes a forward approach needs to help give displaced American workers a way to “rebuild their lives, have an income, and have some self-esteem” in a shifting economic landscape.

“We as a country have to really take that on head on,” Hochberg said. “How we’re going to help train people and prepare them for the jobs of the future, not the jobs of the past.”

Tony Abbott - Prime Minister of Australia 2013-2015. Firefighter down Underdown
Comment
Former Australia PM Tony Abbott: Australia and U.S. Close In Spirit
This site uses cookies. By continuing to use this site you agree to our use of cookies: Find out more.