Former PA. Governor Ed Rendell: Presidency “Will Be Tough Job for Anybody” 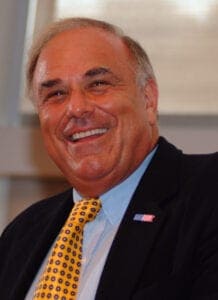 On Saturday, Democrat Joe Biden was projected to become the President-Elect of the US,  but President Trump and other Republicans have been quick to push back that the final results are yet-to-be-determined.

Both candidates used the final days of the campaign season to make their appeal in the key battleground states of Pennsylvania, Georgia, Arizona, Florida, Wisconsin, and Michigan.  Razor-thin leads for Biden in the electoral map have promised recounts, but for both candidates, their message in those swing-states has proven to make all the difference.

Former Pennsylvania Governor Ed Rendell told The Cats Roundtable  that when the final tally was counted in Pennsylvania, he believed Joe Biden would carry the keystone state with a “narrow victory statewide.”

“Donald Trump did a great job,” Rendell added.  “I mean, he gave the devil his due.”

And the numbers speak to Trump’s success, with more than 25,000 more votes in Pennsylvania than voted for him in 2016, dispelling the myth of a blue-wave and proving Trump’s support has only grown over the past four years.

Saturday, Trump’s campaign promised to take the ballot results to the courts, echoing the President’s longstanding criticism of Pennsylvania’s mail-in ballot system, which was extended by the Pennsylvania Supreme Court in light of the pandemic and potential delays at the post office.

Those mail-in ballots, which according to state law must be received on election day, were given until November 6th to arrive, as long as they were postmarked before November 3rd.

“The question is whether they had the power to do it,” Rendell said about the court’s decision but added that “less than five thousand” votes would be impacted, which is far below Joe Biden’s current lead on the ballot.

“Joe Biden will win by between a fifty and sixty thousand vote margin, so it will be a moot point,” Rendell explained.

While Rendell said that he felt “relieved” by Biden’s presumptive victory, he knew it would be a “tough job for anybody” to lead the country through its current predicaments.

“It will be a tough job for anybody to bring the country together, given the level of division and polarization we have,” Rendell said.  “But I think the person with the best chance to do it is Joe Biden.”

Rendell called Biden a moderate who could shake hands with Republicans for the sake of the country.

“When he says he’s going to be a president for red states and blue states alike, I think he will treat everybody fairly, and try to do the best he can for all American citizens,” Rendell said.

As President Trump vows to take the election to the courts, and swing-states prepare for a round of recounts, Rendell reminded The Cats Roundtable that this is a democracy, noting that the process “can be messy.”

“But it is still the best system of governing that exists in the world,” Rendell emphasized, pushing back on Trump’s claims that a fraud had been committed on the American people.

“Our system was in operation, it worked—there was no major fraud or corruption. It was an honest count given by men and women who work at election bureaus, who are our neighbors, our friends, or relatives, they’re not corrupt, and no one can come up with any evidence of any foul play or chicanery and we should all respect the process.”

Former Senator Joe Lieberman: “Don’t Ever Bet Against America”
Comment
Rudi Giuliani: “Substantial Fraud” in Dominion System and Mail-in Ballots
This site uses cookies. By continuing to use this site you agree to our use of cookies: Find out more.