GOP Chairwoman Ronna Romney McDaniel: We’re Not Taking Our Foot Off The Gas” 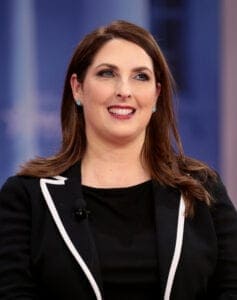 With the first Presidential debate of 2020 around the corner, this Tuesday, September 29th, President Trump and Democratic nominee Joe Biden will meet for the first time on stage to give their almost polar opposite takes on America.
Trump has hit the campaign trail hard ahead of the debates, and GOP National Chairwoman Ronna Romney McDaniel joined The Cats Roundtable to say that the enthusiasm for Trump is growing across the country.
“We’re on track to reelect the President and keep the Senate and win back the House,” McDaniel said optimistically. “Everything’s been turning in our direction—we have a ground game. The energy’s there.”
From Trump Parades to pick-ups with Make America Great Again banners, social media has been filled with what McDaniel calls the “organic enthusiasm” for the President across the country. She told The Cats Roundtable that the President’s willingness to meet voters on their turf, to hold rallies that whip up his base has worked for itself.
“But of course, we’re not taking our foot off the gas at all,” McDaniel cautioned. “We’re not taking any votes for granted, and the President, of course, is out campaigning, every single day.”
Trump’s strong grass-roots presence ahead of the first debate stands in contrast to Joe Biden’s campaign, according to McDaniel.
“I think Joe Biden’s been hiding for as many days as possible preparing,” she told The Cats Roundtable. “I think his team is trying to figure out how he’s going to handle the President, who is a tough debater.”
McDaniel admitted that Biden had a career that spanned four decades in politics and had proved himself in previous debates. But she was confident the real Biden presidency lies behind the politics, in his policy, not the pomp. And the former-vice president would have to answer for the “stances that have taken him so far left.”
“Joe Biden can’t run from the fact that he’s going to raise taxes on 82% of American families, he’s going to get rid of all the energy jobs in this country,” McDaniel warned. “He has stated that he believes in redirecting funds from the police, he believes in re-imagining the police.”
On the other hand, Trump’s focus on the debate will center on his leadership since 2016, which saw record growth in the economy. But it will also be turned to his response to the pandemic. According to McDaniel, Trump “understood the gravity of the situation” despite the failings of countries like China, where the virus originated, and organizations like the WHO, who wish-washed on the danger posed by the coronavirus.
From the ramping up of PPE production in operation Warp Speed to his approving of the PPP loans to help the small businesses stay afloat, McDaniel said that Trump has shown he has met the crisis head-on.
“It has been a truly remarkable task of leadership,” McDaniel reflected. “And he’s delivered, despite democrats trying to politicize a time when we should all be coming together.”

And while the Presidential election was a priority for the GOP, McDaniel told The Cats Roundtable that Republicans were looking for ways to shore up support in a competitive election cycle. With Senate Republicans such as Susan Collins of Maine and Cory Gardner of Colorado up for reelection, McDaniel expects the race for the White House and for seats in Congress to be “neck and neck towards election day.”

Representative Peter King: “Standing with the Men and Women Who Wear the Blue”
Comment
Nick D'Agostino - Dealing with unlicensed street vendors in NYC
This site uses cookies. By continuing to use this site you agree to our use of cookies: Find out more.