James Stavridis: Death of Soleimani Has A Clarifying Effect on the Minds of Others 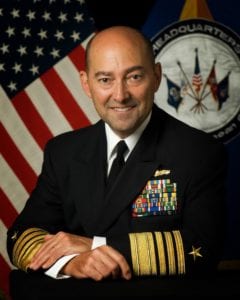 Former head of NATO, James Stavridis, joined The Cats Roundtable again to discuss the turbulent week in the Middle East. With Iran seeming to take a step back, Stavridis and other experts are hoping diplomacy will assert itself, adding that Americans should be thankful that no troops were harmed in the attacks.

“We ought to celebrate the fact that we had no U.S. servicemen killed,” he said.

But with overt military conflict cooling, the fear remains that Iran will continue to conduct proxy conflicts through militia groups entrenched around the region. Along with Iran’s maritime assets in the Arabian Gulf having the capacity to harass civilian and military ships, Stavridis is certain we can also expect a cyber response from Iran.

“I’m sure Iran will continue to conduct a shadow war,” Stavridis told The Cats Roundtable.

There has been a fall out in the Iraqi government over the killing of Soleimani. The Iraqui Parliament voted for the U.S. to leave, but on Friday, the Prime Minister pulled back on the decision. Iraq is in a difficult lurch, with the United States, who have 5,000 troops in the country, and Iran, who have tens of thousands of fighters in proxy militias, coming to blows in its territory.

“Iraq is in a tough position,” Stavridis said.

To complicate matters, the U.S., Iraq, and Iran had worked together to fight ISIS. With the ISIS threat reduced, a rise of friction between the U.S. and Iran has left Iraq between two worlds. While the Iraqi Parliament voted for a U.S. withdrawal after Soleimani’s death, U.S. officials have said it’s premature to discuss the pull-out of U.S. forces, and that discussions should focus on the ongoing fight against ISIS.

“I think a lot of this is posturing within Iraq, I think it’s unlikely U.S. troops are going to get ordered out of the country in the immediate future,” he said.

Hours after the attacks by Iran on Tuesday, a Ukrainian jetliner crashed in Tehran. U.S. intelligence reports have indicated Iran’s involvement, while Tehran initially denied responsibility. Stavridis said “in all probability” the Ukraine jetliner was shot down by Iran.

“How the Iranian air defense batteries could have made a mistake of that magnitude leaves me scratching my head,” he said, adding, “Iran made a terrible mistake.”

The impact of the strike against Soleimani also won’t be limited to the region. Stavridis says places like North Korea will get the message that the U.S. delivers in action.

“When you see missiles flying and see people dying, that does have a clarifying effect on the minds of others,” Stavridis said.

As for where his mind’s eye is this Sunday, Stavridis reflects that he hopes Americans will think about the fathers, mothers, sisters, brothers, wives, and husbands of the 40,000 U.S. troops deployed to the Middle East.

“Think about those families,” he said.

Previous Post Admiral James Stavridis - The world is in turmoil. Iraq, Iran, North Korea all on edge.
Next PostRepresentative Kevin McCarthy: America’s More Than a Country, It’s an Idea

Admiral James Stavridis - The world is in turmoil. Iraq, Iran, North Korea all on edge.
Comment
Representative Kevin McCarthy: America’s More Than a Country, It’s an Idea
This site uses cookies. By continuing to use this site you agree to our use of cookies: Find out more.