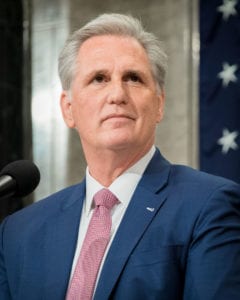 Following the death of Iranian General Soleimani in a drone strike last week, and the Iranian military response this past Tuesday, the tension wasn’t limited to the Middle East. Even as Iranian and U.S. leaders stepped back from military conflict, partisanship on Capitol Hill flared regarding the President’s decision to kill Soleimani due to an “imminent threat” posed against U.S. personnel.

House Majority Leader, Nancy Pelosi, led a vote on a resolution in an attempt to reign in the President’s capacity to carry out similar attacks without congressional approval.

House Republican leader, Kevin McCarthy, joined The Cats Roundtable to unravel the events of the last week, how he’s looking to keep his head above the partisanship bottleneck in Washington, and why Democrats don’t want to give credit where credit is due.

“I think the President has made this world safer and made sure America was safer,” McCarthy said about the new resolution.

McCarthy reminds The Cats Roundtable that the current tensions with Iran have escalated over the last six months, including the downing of a U.S. drone, Iranian harassment of international shipping, an attack on a Saudi oilfield, the death of a U.S. contractor in a militia attack, and the attacks on the U.S. embassy in Baghdad. He says that the killing of Soleimeini, who is responsible for the death of hundreds of Americans, deserves bipartisan support.

“I thought this President has been patient with Iran, but I think he sent a very clear message to them,” he said.

The recent resolution to limit President Trump’s power to go to war with Iran, by Democrats, is the latest strawman to McCarthy.

“This is the form that we use to have the soapbox derby on Capitol Hill,” he said, adding that the decision communicates to Iran that there is division on the President’s decision while adding to the political traffic jam.

With Nancy Pelosi keeping the impeachment articles from the Senate, tempers are flaring as lawmakers face a busy 2020. With the presidential election looming, and a number of trade deals on their plate, Pelosi is beginning to feel pressure from her own party to put down the other shoe.

When she does hand the impeachment papers to the Senate, senators are required to disregard everything but the impeachment. McCarthy is worried this could jeopardize trade deals like the USMCA by choking the schedule. He’s sure that Pelosi’s hesitation comes from a weak poker hand, and for partisan reasons is going against the interest of everyday Americans.

Even as jobs remain at an all-time high, unemployment at all-time lows and consumer confidence climbing, the American public outside the beltway is increasingly anxious about the partisan stalemates riling Washington.

McCarthy thinks that a new approach is required.

“We shouldn’t look at this as Republicans or Democrats,” he told The Cats Roundtable. “We should look at it as Americans.”

The first step is focusing on domestic and economic policies. From prescription drugs, to surprise billing, to increased research and focus on environmental policies, McCarthy says Congress is ready to get to work.

He criticizes Democrats for offering “more subpoenas than they’ve created laws” and decried a return to the same old pattern.

“America is more than a country, America is an idea,” he told The Cats Roundtable. McCarthy, like many lawmakers, says that he wishes to return to the unique essence of America in striving for a more perfect union.

“I think the more divide only harms us—find ways that we work together for the common good.”

Previous Post James Stavridis: Death of Soleimani Has A Clarifying Effect on the Minds of Others
Next PostRudy Giuliani - The City has been put at risk with this new bail reform. We stopped "turnstile justice."

James Stavridis: Death of Soleimani Has A Clarifying Effect on the Minds of Others
Comment
Rudy Giuliani - The City has been put at risk with this new bail reform. We stopped "turnstile justice."
This site uses cookies. By continuing to use this site you agree to our use of cookies: Find out more.