Judge Andrew Napolitano: Clear the Roger Stone Trial is Unfair, But We Have to See Where it Goes 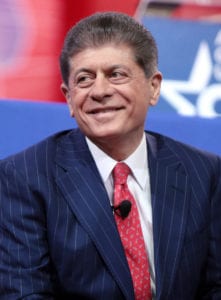 Roger Stone was sentenced to serve 36 to 40 months in prison on February 20th, but Stone is lobbying in court for a new trial, claiming juror misconduct, alleging the jury foreperson, Tomeka Hart, holds a bias against the President and the GOP.

With the Roger Stone saga far from unraveling, Judge Andrew Napolitano joined The Cats Roundtable to break down where the case against Stone stands.

Stone was indicted in November on five counts of lying to Congress, one count of obstruction of justice, and one count of witness tampering. Last week, four prosecutors, who recommended to the judge a seven to nine-year sentence for Stone, resigned, after President Trump was critical of their recommendation, and Attorney General Bill Barr requested them to revise their recommendations.

Stone then requested a retrial following the resignation before his sentencing, which ended up being rejected by the judge. Stone was then sentenced on Thursday to 36 to 40 months in prison. Attorney General, Bill Barr, approved the sentence, while President Trump took time out of a speech in Las Vegas to condemn the trial, calling it “tainted” by the bias of the jury foreperson.

While the President has said he would “let the process play out,” he added he would “love to see Roger Stone exonerated.”

Stone is expected to argue his new request this Monday, accusing the jury foreperson of withholding tweets that should have been revealed when she was interrogated as a potential juror.

He also told The Cats Roundtable that if he were the judge, he would ask why prosecutors were “trying to sabotage” their own case.

Regarding the revelation of the jury foreperson’s critical tweets of the President and the GOP, Napolitano asked listeners: “How could this woman possibly have had a bias against Trump and against Stone and also been a fair-minded juror?”

He is certain that the case against Roger Stone will work out in favor of our principles, and like the impeachment trial, will come out on the side of our better angels.

“This is an example of a case that has a lesson in the outcome,” he explained. “The history of human freedom is paying careful attention to the procedure,” adding “either with presidential intervention or by appellate intervention, Stone will ultimately be vindicated.”

NJ Representative Jeff Van Drew: The Democratic Party Left Me
Comment
Frank Garcia - Seems Albany intent to put small business out of business.
This site uses cookies. By continuing to use this site you agree to our use of cookies: Find out more.