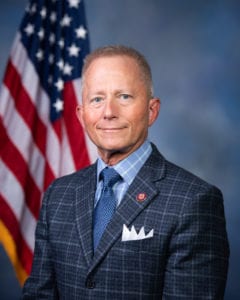 New Jersey Congressman Jeff Van Drew joined The Cats Roundtable to explain how his blue-dog values have found a home in the GOP, and why he’s still got his eye on bridging the aisle.

Even in his early political career, Van Drew describes himself as a “blue-dog Democrat,” building “good relationships on both sides of the aisle.”

But, he explained, even by the time he entered the New Jersey State Senate, he was noticing a shift in the Democratic party.

“Whether it be support for open borders, sanctuary states—whether it was just a change in the outlook of America,” Van Drew reflected, he was beginning to sense a shift away from ideals such as exceptionalism and patriotism.

When impeachment began to gain steam, Van Drew found himself at odds with Democrats. He felt the calls for impeachment were too partisan, and that there was “nothing impeachable” in the first place, leading him to stand against the impeachment inquiry, despite pressure from his party, even in his own congressional district. Though he drew the ire of colleagues, he also garnered the attention of an unlikely ally.

Late last year, Van Drew received a call from President Trump, who had seen and heard him arguing against the impeachment trial. Trump wanted to meet.

Following an hour and a half meeting with the President, Van Drew had made his mind up. He was switching parties. He told The Cats Roundtable that like GOP converts, Ronald Reagan and Donald Trump, he intended on doing “the best possible job that I know how to do.”

After their meeting, Van Drew said the President asked what he could do for Van Drew.

He told The Cats Roundtable he asked the President to come to south New Jersey, where a presidential visit was long overdue and where the people “often feel like they’re forgotten.”

The President agreed, and held one of his largest rallies in Wildwood, NJ this January, throwing his support behind Van Drew.

“It was great for south Jersey,” Van Drew said.

He added that the fall out of impeachment perhaps is just in its beginning, and the buck stops with Democratic leaders who failed to listen to voices like his. He told The Cats Roundtable that he had always argued the impeachment would “split the country apart” while also attempting to disenfranchise “millions of voters who voted for the President.”

“Let the elections take care of this,” Van Drew said, adding that Congress needs to remove itself from the “toxic” cycle it finds itself in to ever hope to see both sides agreeing to compromise.

“The issue is when such hateful things are going on, people don’t work together,” he said.

Ultimately, Van Drew believes the impeachment and the subsequent acquittal of President Trump has “wasted millions of dollars” and “hundreds of hours of time,” and that ultimately it will work out in the President’s favor for the election this 2020.

“I think there’s a good chance the President’s going to have a real blow out here.”