Mike Lindell: “I Have No Regrets” 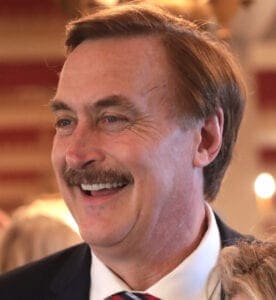 Author, CEO, and inventor Mike Lindell defies the usual image of a businessman.  His brutal honesty about his views of American life has often landed him in hot water with the liberal media, and today “the my pillow guy” has become the latest target of the post-Trump administration culture war.

While advocating for what he sees as legitimate concerns about voter fraud in the 2020 presidential election, his character, his relationships, and his company My Pillow, which employs over 2,000 workers he called “family,” have been villainized by the mainstream media, leading to a larger corporate boycott of his products

But Lindell isn’t new to having a media target on his back.  Following a meeting with the President in the summer of 2016, he became a strong supporter of President Trump.  And the criticisms soon flew his way

“From that point on, they called me a racist,” Lindell told The Cats Roundtable.  “The media just attacked me back then.”

But, perhaps beginning with the permanent suspension of President Trump’s Twitter account, Lindell noted the atmosphere heading into the Biden presidency had gotten dramatically more toxic.

“You’d think it would be the end of the world as we know it that I’ve been working hard trying to uncover evidence since November 4th, out of my own money, and then the attacks started,” Lindell reflected. “I don’t know why—because what? Because I’m trying to do something good for the country?”

But the larger cancel culture perhaps is most dangerous because of the ripples it creates: boycotting Mike Lindell only will hurt American workers, in a time when liberals are also claiming to hold the working class up.

But consumers have fought back.  Though the box stores have cut ties, others have decided not to participate in the larger cancel campaign, while consumers have responded by buying directly from My Pillow.  And Lindell is fighting back, too.

“I’m not putting up with this cancel culture and trying to destroy things that are great, that are going to help millions of people,” Lindell told The Cats Roundtable, particularly incensed at the attacks on his characters and his past struggles with addiction. “So I’ve had it—I’m on the attack, if you see me in the media, I don’t back down.   I double down.”

Lindell was confident, optimistic, and his attitude on The Cats Roundtable was of a person who knew they would not be disappeared. Asked if he had any regrets, Lindell was emphatic.

“Absolutely not,” he said, telling The Cats Roundtable that he will continue to speak out about voting machine fraud, even as he faces litigation from the company he accuses of irregularities.  “I backed the best president we ever had.  He kept his promises, he did so much for this country, and so much for people and business and I have no regrets.  I’d do it all again, only I’d do it double.”

Former Speaker Newt Gingrich: “A New, 21st Century Contract With America”
Comment
Dick Morris - Bidens first week in office.
This site uses cookies. By continuing to use this site you agree to our use of cookies: Find out more.