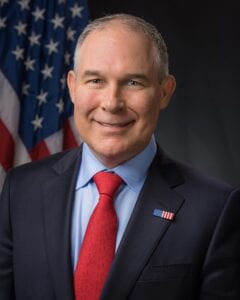 In 2016, Trump ran on a campaign that promised to undue Obama-era energy regulations and has largely delivered, including removing the US from the Paris Climate Accord while fostering a business-oriented approach to environmental protection at home.

But many such as the former Administrator of the EPA, Scott Pruitt, are worried that a new Biden administration could see a return to Obama-era uncertainty in sectors of the US economy that have largely reaped the benefits under Trump energy policies.

“I think what has caused concern historically with respect to certain sectors of our economy, is a lack of certainty on regulatory response,” Pruitt told The Cats Roundtable.

Pruitt blamed this pre-Trump uncertainty at what he called “aspirational” regulations such as the Paris Climate Accord, which he called “extra-legal” while questioning the psychic dissonance of such environmental agreements with the socioeconomic reality.

For instance, in the Paris Accord, Pruitt noted that India and China, the latter of which is the number one emitter of carbon in the world, have no obligation to meet the expectations of the Accord until 2030.

“So, for them to delay their responsibilities or obligations under the Accord puts America at a disadvantage,” Pruitt noted. “It’s one thing to say we’re going to rejoin the Paris Accord, it’s quite another to say what does that actually mean?”

Pruitt was also concerned about Biden attempting to pass policies with a “lack of connection to the Clean Air Act,” such as Obama’s 2015 Clean Power Plan, which was stayed by the Supreme Court.

During the 2020 election, Biden battled the backlash in the wake of his comments on the transition from fossil fuels to clean energy, and Pruitt called Biden “antagonistic” toward pipelines, which Pruitt believes is the safest way to transport oil and gas.

“What kind of steps will be taken by the Energy Department and others to really put a halt on continued development on pipelines?” Pruitt posed to The Cats Roundtable. “It’s a tremendous concern going forward.”

The debate about fossil fuels comes at a time when American car companies are struggling to adapt to the growing marketplace in electric and hybrid vehicles “despite the great effort.”

“At the end of the day, we ought to build cars in this country that are more efficient, and provide great protection for the environment, but also cars that people want to buy,” Pruitt told The Cats Roundtable.

“We need to do what we can to depoliticize these very, very, I think, contentious issues,” Pruitt asserted. “And the way you do that is you make Congress do what they’re supposed to do, which is give the authority to the regulatory agencies, the executive branch, to regulate with certainty.”

Pruitt was worried Biden was a return to the same old “executive fiat,” where regulatory breaches were commonplace, legislative authority was ignored, and the agreements made were as good as castles in the air.

But, if certainty arrives, as Pruitt believes it did in 2016, prosperity in the 2020s will be sure to follow.   And despite his misgivings, Pruitt hopes we’ll make out the forest from the trees.

John Solomon - The key to the January runoff is signature verification
Comment
Rep Peter King: White House “Can’t Have It Both Ways”
This site uses cookies. By continuing to use this site you agree to our use of cookies: Find out more.