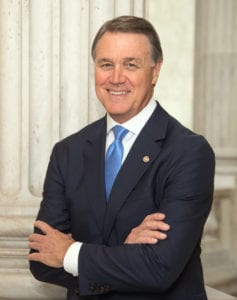 Senator David Perdue of Georgia sat down with The Roundtable to share his take on China following his visit to Beijing, his optimism for the future, and how to fix Washington.

Senator Perdue, the former CEO of Reebok, admitted to The Roundtable that Washington is “the most frustrating place I’ve ever seen in my life.”

“They’re just not built to get results the way we were in the business community,” he continued but added that progress is being made.

“We’ve got some people who’ve come in recently that get the idea that you got to get some things changed there.”

He cites the House’s lack of action on the USMCA, a trade deal with Mexico and Canada, our two largest trading partners.

“It would pass on the House today, by the way, John, if they would just put it on there—180,000 jobs are waiting just because of that deal.”

But even with the deadlock in Washington, Senator Perdue cites the latest jobs report to show the American economy is still strong.

“This is the best economic turn around I can find in U.S. history, the lowest unemployment in 50 years,” Senator Perdue told The Roundtable.

With Great Britain exiting the EU, Perdue expects more “clary about what they’re—how they’re going to do this, and if they’re going to do it.” With potential lifting of tariffs between the EU and the United States, Perdue believes our trade partners see “we’re getting the benefits” from deals such as the Trans-Pacific Partnership and are ready to come to the table.

But Perdue shares with Catsimatidis that Washington is getting in the way of American interests.

“Partisan politics are what drive Washington right now on the Democratic side,” he told The Roundtable, calling the impeachment vote that passed in the House this Thursday along party lines “the most unfair thing I have seen since being in Washington.”

“They’re denying due process to the President of the United States,” Perdue said. He expects that if a vote comes, he expects the House to pass it. But he hopes by offering President Trump the chance to “explain to the American people his side of the story,” the Senate will vindicate him.

“This is nothing but a sham, John,” he told Catsimatidis, calling the impeachment inquiry “another form of obstructionism.”

“It’s an outrageous process—it keeps us from doing the people’s work, and people out there in America are beginning to get tired of it.”

Regarding his recent visit to China, and announcements China and the United States were beginning trade talks last week, Perdue calls it a “major step forward.”

“What we’re focused with right now is a world that’s trying to decide whether we’re going to slip into another cold war, and an arms race, or whether we can find a way to cooperate and compete with China in a way that we haven’t in the last 30 years.”

Perdue believes China’s trade policies reflect their larger attitude towards democracy, saying the reaction to the protests in Hong Kong and China’s wider social policies are revealing the Chinese are “trying to control their people in a way that we’ve not seen since the Cultural Revolution.”

In fact, compared to America’s long term relationship with Russia, Perdue believes China demands the most attention, stating that Putin is “not a long-range threat, but in the short term he’s very dangerous.”

“China is a long term threat,” he clarified, “not only to our sovereignty but to really what’s going on around the world.”

Perdue tells The Roundtable that America’s withdrawal from around the world has created power vacuums, and Trump is trying to reverse an Obama-era isolationism.

He calls the announcement last week of the death of the leader of the Islamic State, Abu al-Baghdadi, and his second in command, by American special forces “the greatest news since we took Osama bin Laden out.”

“President Trump along with our special forces, our military, our intelligence community, and our friends and allies have been stalwarts in staying in the fight against ISIS,” the Senator remarked.

“This fight continues today—we’re not done with this yet,” he said.

But Senator Perdue is overall optimistic about America’s future.

“What we have to do is get away from this extremism in our partisan politics,” he concluded to The Roundtable. “John, if we can do that, we’ve got a great future.”

Previous Post Congressman Peter King: The President is Looking to the Fight
Next PostArthur Piccolo - Moving the stock market bull to another location, not a good idea.

Congressman Peter King: The President is Looking to the Fight
Comment
Arthur Piccolo - Moving the stock market bull to another location, not a good idea.
This site uses cookies. By continuing to use this site you agree to our use of cookies: Find out more.