Senator Ron Johnson: Democrats Behind Shadow “Coup” of the President 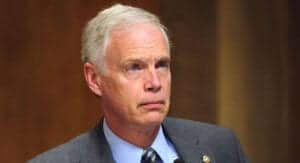 If anyone thought fate was finished with this election season, 2020 has something else in mind. Early Friday morning, President Trump announced he had tested positive for the coronavirus, The President’s physician, Sean Conley, said he was “cautiously optimistic” with the President’s condition, as he undergoes treatment at Walter Reed Medical Center.
Senator Ron Johnson joined The Cats Roundtable in wishing for the President’s quick recovery, but also took the time to emphasize that this election was for “all the marbles.”
The news about the President’s health threw another shake-up into an already unprecedented election, including a contentious presidential debate this Tuesday that saw Trump trade barbs with Democratic nominee Joe Biden. The President painted Biden as a nominee compromised by conflicts of interest at home and abroad, while Biden attempted to convince Americans he stood apart and above the progressives of his party.
The President’s concerns over Biden and his son Hunter’s conflicts of interest this Tuesday came on the heels of September 23rd Senate report into Hunter Biden issued by Sen. Johnson and Sen. Grassley. The Senate’s inquiry has been focused on Hunter Biden’s business dealings with the Ukrainian energy company Burisma, which “cast a shadow” over the Obama era US-Ukraine relations, according to the report.
Senator Johnson told The Cats Roundtable that he released the report because it was information “the American people should have known” years ago. He pushed back on media criticism that the release of the Senate report was meant to interfere with the November 3rd election.
“The interference in the election would be if we don’t release the information, the American people go to the polls, and they really don’t have a full understanding of the corruption,” Johnson explained.
Though the Wisconsin Senator supports the inquiries led by Attorney General Bill Barr into the partisanship at the heart of the Mueller probes, he added that it was “way too late in the process.” Too late because Johnson believes the Mueller probes should have been left dead on arrival.
“This investigation never should have gone beyond January 2017,” Johnson said. “It should have been shut down—we never should have had a special counsel.”
According to Johnson, the 2016 investigations that eventually led to the President’s impeachment are part of a deep state system that is still attempting to undermine the President ahead of the November election.
“There is a concerted effort, an organized effort, to sabotage this administration,” Johnson declared.
He attacked the media for their meager reporting on the investigations into Hunter Biden and the origins of the Mueller probe, telling the Cats Roundtable “the bias in the media is revealed far more in what they don’t report.”
“It’s amazing, the deafening silence on the part of the media,” Johnson said.
Johnson was particularly worried by the policies that Democrats might attempt under a Biden administration, pointing to Biden’s failure to state Tuesday whether he would pack the Supreme Court in the event of Amy Coney Barrett’s approval.
“A vote for Joe Biden, from my standpoint, is a vote for anarchy—it’s a vote for socialism,” Johnson added, stating the former Vice President had shown he stands against calls for law and order.
Because of the high stakes of this election made only higher by the news this Friday, Johnson echoed concerns about the integrity of the November election. He said that alternatives such as mail-in balloting have too many inconsistencies, and open up “ballot-stuffing and voter fraud.”
Johnson said that a trend of “making-up election law on the fly” could lead to a delay in the counting process, something he tells The Cats Roundtable is “what we’re being set up for.”

Judge Jeanine Pirro - The Left Wing ANTIFA socialists
Comment
Judge Jeanine Pirro: Trump’s The Fighter We Need, Biden a “Trojan Horse”
This site uses cookies. By continuing to use this site you agree to our use of cookies: Find out more.