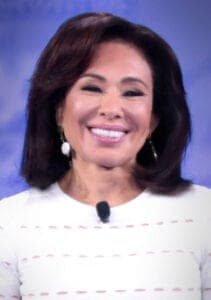 The gloves came off on September 29th, when President Trump and Democratic nominee Joe Biden met each other at the first presidential debate.
As moderator Chris Wallace attempted to direct the two political giants, the incumbent and his opponent exchanged in a debate unlike any in recent memory.
Judge Jeanine Pirro joined The Cats Roundtable to explain how Joe Biden’s performance fell flat on Tuesday night, while Trump proved his leadership had the mettle that America needs.
“I believe Joe Biden doesn’t have a foot to stand on in terms of his experience and his background, and it shows,” Pirro said, adding that Biden discredited himself with his personal attacks against Trump.
The tension and turbulence on Tuesday night seemed to become a microcosm for the divide across the country, in the face of a series of crises that defy compare in American history. To Pirro, now more than ever America needed “a fighter” to lead us out of the gauntlet, and Trump had proved himself to be that fighter.
“We need someone like the man who was on that stage the other night, not someone who’s going to be timid,” Pirro said.
The judge told The Cats Roundtable that she is worried Biden is the spear-tip of a larger, systemic deterioration of American freedoms, headed largely by the far-left, who she said was dictated by “dogma” for “raw, political power.”
“He’s nothing more than a Trojan horse for the left,” Pirro said about Biden, adding the America that the left wanted was “not the America that our Founding Fathers envisioned.”
She continued that the convergence of so many crises leaves certain freedoms at risk. With state and local governments wielding unprecedented powers during the pandemic, Pirro told The Cats Roundtable she believed attempts to lock down the country were part of a larger “game plan” that seeks to erode the rights and privileges of Americans.
According to Pirro, if Biden is elected, Kamala Harris would “be running everything.”
She told The Cats Roundtable she was looking forward to the Vice-Presidential debates next week. As a former prosecutor, Pirro said she wanted to see how Senator Harris makes the case for going from “pro-law enforcement to posting bail for criminals.”
“Sometimes we need to believe people when they tell us who they are,” Pirro explained, adding that Harris was perhaps “the most leftist senator in the United States Senate.”

Senator Ron Johnson: Democrats Behind Shadow “Coup” of the President
Comment
Dick Morris - Trump needs as many debates as possible
This site uses cookies. By continuing to use this site you agree to our use of cookies: Find out more.