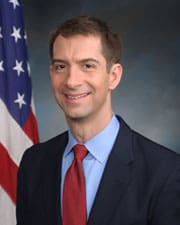 “TikTok is a Trojan horse on your phone for the Chinese Communist Party,” Cotton said, echoing President Trump’s declaration that the widespread use of Chinese apps was a “national emergency.”

The executive order is expected to bar TikTok and WeChat from Apple and Google app stores when it takes effect in 43 days, and Cotton’s comments on the social media apps gave way to his rising concerns for mail-in voter fraud during the Presidential election.

With 85 days until the November election, states have begun the debate whether or not to expand voting by mail as an alternative to in-person voting.  The move away from in-person voting has sparked worries from Senator Cotton and other lawmakers that mail-in voting will lead to inaccurate or fraudulent results.

“I’m very worried about the prospect for wide-scale fraud and abuses and lost votes in this election, if states move to mass mail-in balloting with no history or practice,” Cotton explained.

Cotton drew a distinction between absentee voting when a voter requests a ballot when they can’t vote in person, and mail-in voting, when a state sends a ballot to every registered voter, which Cotton said was “ripe for fraud.”

“That’s to say nothing of the fact that most states don’t have the experience of conducting mass vote by mail,” he added.  “I think this is a recipe not just for fraud, but a protracted election.”

Instead, Cotton called for a balance between election day voting, early voting, and extending absentee voting, rather than a one-size-fits-all model.

“It can be done in a safe and efficient manner that protects the right to vote and protects public health,” he told The Cats Roundtable.

This month, the Arkansas Senator also introduced the Campus Free Speech Restoration Act, which aims to protect the first amendment rights of students on public college and university campuses.

“I introduced legislation this past week that would withhold federal funds from colleges that infringe on the free speech rights of their students,” Cotton explained.

He believes now is the time to hold higher education accountable when the institutions evade their constitutional responsibilities, telling The Cats Roundtable that he has witnessed the consequences of an illiberal culture first hand.

On June 3rd, as protests and unrest began to spread across the country, Cotton published an Op-ed in the New York Times calling for the intervention of Federal troops when local law enforcement failed to quell unrest.  Initially defending Cotton’s article, the Op-ed editor was eventually forced to resign, and the NYT issued an apology.

Cotton told The Cats Roundtable that the saga “exposed” the NYT as a “laughingstock.”  He also drew a line between his fight against illiberalism in higher education and what he sees as an intolerance at the heart of major institutions.

Senator Marsha Blackburn: China is Not Our Friend
Comment
Michael Miller - Socialists forbid trips to Israel.
This site uses cookies. By continuing to use this site you agree to our use of cookies: Find out more.