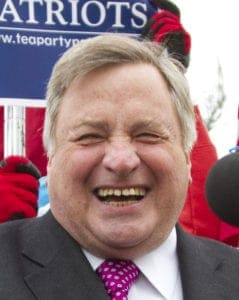 Dick Morris, political author and commentator, called in to The Cats Roundtable to join the morning discussion.  With his ear to the ground, he gave his case against the impeachment inquiry announced this Tuesday, and called the latest news from Washington a “fabrication.”

Morris began by telling the Roundtable he believes the House is pushing the inquiry forward because many Democrats face re-election in 2020.  He also said they need to shore up their progressive base, recalling the 2018 primary upset of Democratic Alexandra Ocasio Cortez for New York’s 14th district over the 10-term incumbent Joe Crowley.

“There’s going to be no support for impeachment in the Senate,” Morris says, though impeachment may “pass in the House,” he admits, but only because it is passed by the “unanimous Democratic Party.”

“I think that it will get no republican votes anyway, and the people will see this as partisanship,” Morris reflects.

As the election season conflicts with the impeachment schedule, Morris believes “people begin to think, wait a minute,” then think, “we have an election coming up in six months, when do we leave this up to the voters instead of trying to take them out of the equation and letting congress adjudicate it?”

He informs the Roundtable that the impeachment inquiries leveled at the President fail to recognize the smoke from the fire.  He adds that Joe Biden is supposedly withholding aid from Ukraine, until the prosecutor looking into his son’s involvement as a board member in a Ukrainian energy company is fired, and that entire situation is being ignored.

“The decision to impeach Trump was decided the minute election returns were in,” Morris reports. “They first thought they could do it with a CIA media plot to fabricate that he was colluding with Putin to fix the election.”

“The whistleblower who brought this up is a CIA guy, he’s a Brennan appointee,” Morris tells Catsimatidis, citing media reports that the whistleblower behind the inquiry to impeach the president was a CIA operative who once worked for the white house.  “This is the same crowd that passed the Mueller report and the collusion story.”

But Morris believes the nail in the coffin of the inquiry is that the phone call between the President of Ukraine and President Trump is not what the whistleblower complaint reports.

“There was no quid pro quo, there was not even a promise made,” Morris rejects, finding the whistleblower complaint “largely focuses not on a phone call but on efforts of the Trump administration to find out if Ukraine helped Democrats in the 2016 election by digging dirt” on Paul Manafort (former Trump campaign chairman, who was found guilty of tax and bank fraud in 2018).

If Democrats did contact Ukraine, Morris claims “that’s as worthy of investigation as whether Trump administration colluded with the Russians.”

With a parting thought, Morris asserts the undercurrent of the impeachment inquiry is “Biden cannot be elected,” believing Warren will become the democratic nominee, but that “Trump will destroy her, he will carry 35 or 40 states.”

“The media is pushing this phony narrative has it’s double edged sword,” Morris reveals, “One edge to kill Trump, the other to kill Biden.”

Sarah Sanders on Ukraine “Witch Hunt”
Comment
Admiral James Stavridis - North Korea will never give up its nukes. Now submerged capabilities.
This site uses cookies. By continuing to use this site you agree to our use of cookies: Find out more.