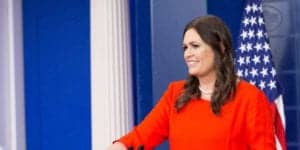 This Sunday, September 29, Sarah Sanders joined The Cats Roundtable to share some of her insight as former White House Press Secretary into this week’s politics.

Reacting to the big news out of Washington, with impeachment inquiries launched this Tuesday into President Trump, Sanders reasons that the inquiry follows “the same playbook” as the investigation into alleged collusion between then-candidate Trump’s presidential campaign and Russia in the 2016 presidential election.

The impeachment inquiries announced Tuesday concerned a whistleblower complaint regarding a July phone call between President Trump and Ukrainian President Volodymyr Zelensky, alleging President Trump improperly asked Ukraine to investigate Joe Biden and his son Hunter, who worked on the board of an energy company in Ukraine.  The Bidens have denied wrongdoing, while President Trump released the transcripts of the call with President Zelensky, calling the inquiry a “witch hunt.”

“It’s a dangerous way to engage in election,” Sanders warned on The Cats Roundtable, “and I think that frankly, it’s backfiring on Democrats.”

Sanders sympathizes that Democrats are concerned “with trying to preserve their re-election and committee assignments,” but predicts it will lead to an upswell in the base for the re-election of President Trump.

Sanders also gave Catsimatidis her forecast for the Democratic Primary, believing Senator Elizabeth Warren’s momentum could overtake former Vice President Joe Biden.  She even admits a similarity between Trump and Warren’s agendas in their diagnosis of the country’s problems.

“But if you listen to how they want to solve them, you couldn’t find a starker contrast between the two of them,” she notes.

Sanders believes radical ideas “are just not going to sell in most of America” and if the Democrats create a Warren ticket for 2020, there will be “no better news for Trump” and Warren’s policies will drive voters to “help re-elect the president.”

Though she can predict Democrats “will make big attempt to try to move back some to the middle” after the primary, Sanders finds they are “beholden to the far-left wing” voices in the party and it will make it difficult to regain independent voters.  To Sanders, Warren does not seem to want to get to the middle, calling it “a scary thing if she became president.”

Sanders tells Catsimatidis Speaker of the House Nancy Pelosi had no choice but to hand the reins “over to the left wing of the party,” and that the Democrat’s inability to put progressive branches of the party “back in the bottle” is creating a Democratic Party even moderate Democrats will find hard to recognize in 2020, and fuels Trump’s re-election.

With the end of the interview, Sanders states, “I’m thankful I’m blessed enough to be born in America, and let’s do what we can to make sure we maintain the beauty of this country,” restating she believes that will require the re-election of the president “based on everything I’ve seen out of the Democratic Party right now.”

Before they part, Catsimatidis asked one final question about rumors of a potential gubernatorial run.   Sanders, laughing, replied she will “keep you posted.”

Previous Post Sarah Huckabee Sanders - Democrats focus on everything else but the good of the Country.
Next PostDick Morris: In Washington, Who’s Really Innocent, Who’s Really Guilty?

Sarah Huckabee Sanders - Democrats focus on everything else but the good of the Country.
Comment
Dick Morris: In Washington, Who’s Really Innocent, Who’s Really Guilty?
This site uses cookies. By continuing to use this site you agree to our use of cookies: Find out more.