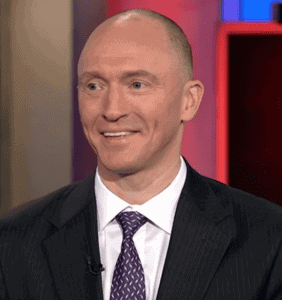 Last week, a Justice Department’s Inspector General created a report into the Russia investigation that railed the FISA documents filed against former Trump campaign associate Dr. Carter Page.  Those filings, beginning in the fall of 2016, according to Inspector General Michael Horowitz, contained 17 flaws and omissions. Attorney General William Barr and U.S. Attorney John Durham are conducting their own broader inquiry into the Trump-Russia investigations.

Dr. Carter Page joined The Cats Roundtable this Sunday to discuss Horowitz’s announcement, and what it means for him and all Americans going into the new year.

The FISA requests to wiretap Page were signed off by top members of the FBI, the DOJ, and the Foreign Intelligence Surveillance Court.  Redacted FISA document records from the 2018 release show that the DOJ and the FBI relied on an unverified dossier compiled by a British ex-spy, Christopher Steele.  It was not disclosed to the FISA court that Steele had received funding from the Democratic presidential campaign of Hillary Clinton.

The revelations come as late vindication to Page.  “It’s created so much damage to so many lives” he said, including President Trump and his supporters.  He condemned what he called the “collusion” between media personalities, such as Rachel Maddow, and the Democratic party for pushing the Steele dossier.

The Inspector General also criticized the FBI’s failure to update the FISA court as it learned new information in the case.  This information, such as a Trump campaign aide denying to an informant that anyone had contact with Russia, as well as Steele’s unreliability, could have undercut the filings into Page.  Horowitz said his office will be conducting an audit into the FBI’s applications with FISA courts.

Page told The Cats Roundtable that affidavits submitted by the DOJ and the FBI were “opposite to the truth.”  “Instead of saying I was a source for the CIA and the FBI, they edited it to say I was not,” Page said. “It was really a tricky move.”

Though Inspector General Horowitz has announced his office will be auditing the FBI’s filings with FISA courts, saying there were “extensive compliance failures,” Page said the intelligence community has a long way to go to reclaim its reputation.

“You come away feeling like the FBI engaged in really egregious misconduct,” Page said.

As for how his own life has changed, Page says the damage has been “incalculable.”  Along with legal fees and death threats, Page says it’s difficult to not let it take “over all aspects of your life.”

He says the best damage control is to insert reform into intelligence committees.  When an American citizens’ civil liberties can be compromised because they’re on the wrong end of political friction, it demands change.

“It’s just not open to interpretation, it’s just a very clear wrongdoing, and we’re just at the start of this story, John,” he said.

With Attorney General William Barr and U.S. Attorney John Durham conducting their own inquiry into the broader actions taken during the Russian investigation, Page hopes further vindication will be forthcoming.

Previous Post Dr. Sebastian Gorka - We are witnessing an attempted coup of the President.
Next PostAssistant to the President Peter Navarro: A Bull Market for 2020

Chris Fenton: “We’ve Created a Mess for Us to Fix”

Dr. Sebastian Gorka - We are witnessing an attempted coup of the President.
Comment
Assistant to the President Peter Navarro: A Bull Market for 2020
This site uses cookies. By continuing to use this site you agree to our use of cookies: Find out more.