Assistant to the President Peter Navarro: A Bull Market for 2020 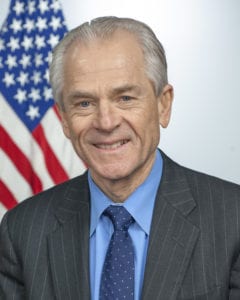 With the new year around the corner, The Cats Roundtable is asking: What Will Happen in 2020? Assistant to the President and Director of Trade and Manufacturing Policy, Peter Navarro came in to give his forecasts on the bulls.

This past year’s jobs’ reports have been the best they’ve been, and despite trade-wars with the E.U. and China, the stock market has broken records. The 2019 unemployment rate is the best it has been since 1969, and Peter Navarro says that all arrows are pointing higher.

“2020 is setting up beautifully for both a strong economy and a bullish stock market,” he said, predicting the DOW will pass 30,000 if federal interest rates are kept low and the USMCA is finalized.

Navarro says that the current success is based on 4 compass points: deregulation, tax cuts, cheap energy, and fair and balanced trade.

He says we are where we are now because the Trump administration is creating real outcomes with its policies. He cites that rising wages for workers translates into greater purchasing power for consumers, whose confidence is building.

“Consumers are the anchor of the boom that’s going to occur in 2020,” he said.

But that’s not all. Navarro mentioned the approval of an appropriation bill for 2020 and the National Defense Authorization Act as evidence of the government’s own impact on economic growth.

And it doesn’t stop there. With five trade deals covering more than 60 percent of U.S. trade to be put in place in 2020, including the USMCA and a phase one trade deal with China, Navarro predicts strong economic growth, with business investments flooding into the U.S., particularly in the auto industry.

For China, Navarro tells The Cats Roundtable that a principal agreement was made weeks ago, but that translating the agreement would take time. With the Chinese purchasing U.S. agricultural products, he’s confident the deal will go forward. As for how the U.S. will handle the U.K. following Brexit, Navarro says he’s “all speed ahead for the U.K.,” but says we can only get a “hard grip fit” once the U.K. has left the E.U.

CNBC has reported that world markets are up to $17 trillion dollars, with consumer spending over Christmas up 3.4 percent, a record high. Navarro calls the confidence “real optimism.” He says that there is no more opportunity than now, and that gives Americans, particularly the working class, faith in their own opportunities.

“It has transformed the Republican party into the party of the working class,” Navarro said.

Dr. Carter Page: Damage Done By FISA Courts “Incalculable”
Comment
Dr. Sebastian Gorka: Vote To Stop A Silent Coup
This site uses cookies. By continuing to use this site you agree to our use of cookies: Find out more.