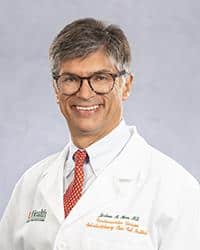 Founding Director of the University of Miami Interdisciplinary Stem Cell Institute at Miller School of Medicine, Dr. Joshua Hare, joined The Cats Roundtable to talk about the progress in the field of stem cell research, and why stem cells could be an answer for diseases with unmet needs.

The ISCI is one of the leading programs in the country for translational research of cell therapy and other regenerative medicine. “We’ve been working very diligently to conduct basic research and clinical trials to understand how stem cells and other therapies can be best applied to human diseases,” Dr. Hare explained.

One of these focuses is the application of stem cells into the human body that allows the body to make any kind of cell it needs.

The idea is that if your body is injured, stem cells can replace or trigger the replacement of missing cells.

Dr. Hare says this application is one of the original ideas as to why people are so excited about stem cell therapy but has led to “minimal success.”

This lack of success comes from the fact that scientists have learned that if you inject certain types of stem cells, instead of replacing missing tissue, they start healing as a result of their specific properties.

“We’ve learned that the cell therapy can improve certain diseases, but they don’t necessarily replace missing cells, and that’s one of the conundrums in the field right now and an area that requires a lot more research,” Dr. Hare explained to The Cats Roundtable.

This doesn’t stop lab breakthroughs from occurring, such as the replacement of cells in the pancreas as a result of diabetes, but Dr. Hare calls it “a big leap” from success in a cultured dish to success in a human being.

Still, he believes there’s promise. The ISCI has shown that by injecting adult stem cells into people with heart disease, there are improvements in heart function and reduced damaged tissue in their hearts. Instead of becoming new heart muscle cells, the stem cells began stimulating the heart to make its own.

“This is something that’s being aggressively pursued by our group and others,” he said.

If there is progress in heart disease, then Dr. Hare believes scientists could apply the same logic to other organs, or diseases such as Parkinson’s.

While progress has been made on the treatment of diseases, blind spots remain. Dr. Hare explains two of these are diseases due to tissue injury and diseases due to inflammation, and that cell therapy can potentially provide in these areas, and others, in ways previous treatments have not.

According to Dr. Hare, inflammation is also one of the leading causes of the aging process, where stem cells have contributed in preliminary studies to what he calls “successful aging.” With people statistically living longer, he says it has become a necessity to see that the later years of life are healthy, productive years, instead of years of disability.

Dr. Hare concludes by telling The Cats Roundtable that with successful treatment of patients with certain types of cancer, as well as sickle cell disease, a painful disease due to a mutation in the hemoglobin gene, we are only at the tip of the iceberg for the potential of cell therapy.

“We’re at a very exciting time in medicine,” he said.

Congressman Lee Zeldin: Impeachment Hijacks The Interests of The American People
Comment
Mike Palladino - After 40 years NYPD retiring. Concerns for the City backsliding.
This site uses cookies. By continuing to use this site you agree to our use of cookies: Find out more.