James Carville: “Anybody’s Guess” If Election Will Happen in November 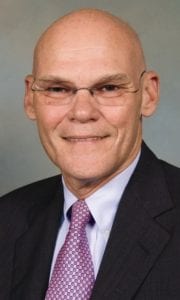 As the coronavirus continues to reroute American life, the business-as-usual routine of politics remains up in the air.

With the Democratic Convention possibly postponed, and growing calls for Bernie Sanders to exit the race for favorite Joe Biden, Democrats are eyeing the election this November with increasing apprehension.

Democratic analyst James Carville joined The Cats Roundtable from New Orleans to discuss the state of the Presidential race and politics as usual, amid the pandemic.

Carville told The Cats Roundtable the consensus is that Biden will get the Democratic nomination, even with the convention in limbo, and the calls for the votes for Democratic nominees to be conducted virtually.

“A lot’s going to have to happen to him if he’s going to lose this election,” Carville said about Biden’s nomination, but added the former Vice President has to “do more” if he wants to win in November.

But that doesn’t mean Bernie Sanders is out of the race. With the ailing stock market and the apprehension of the health care sector’s ability to confront the pandemic, Carville doesn’t rule out that voting patterns could change to “tilt more towards Bernie’s direction,” but admitted Sanders’ chances to capture the nomination were shrinking.

With Sanders’ strong small-donor base behind him, Carville told The Cats Roundtable he can “keep sputtering along” despite the growing call for him to concede.

“Sanders doesn’t care that much about the election,” Carville said, adding a growing concern is that Sanders’ supporters could opt for four more years of Trump to “expedite the revolution” if Sanders isn’t nominated.

“If you want to say it’s an admirable thing that someone thinks the same way at 78 as they did at 18—then Bernie Sanders is your guy,” he said.

Carville also noted the rising popularity of New York Governor Andrew Cuomo across the Democratic party as he leads New York through the pandemic.

“He’s definitely going to be on everybody’s list of potential strong candidates,” he said about the 2024 election.

According to Carville, the election and how it’s conducted in November is “anybody’s guess” in the current climate, but also said that the current focus goes beyond politics.

“The politics will take care of itself—it really will,” he told The Cats Roundtable, adding the focus should be on “beating this thing back,” including social distancing, washing hands, and a healthy dose of common sense.

“The only way we’re going to come out under this lockdown is if we all do it, and do it conscientiously,” he said. “That’s all we can do—that’s it.”

Previous Post Dr. Ian Lipkin: “I Just Know What We Need to Do” to Fight Pandemic
Next PostDeputy NYPD Commissioner Larry Byrne - This is a huge burden on cops, but are among the heroes of City.

Dr. Ian Lipkin: “I Just Know What We Need to Do” to Fight Pandemic
Comment
Deputy NYPD Commissioner Larry Byrne - This is a huge burden on cops, but are among the heroes of City.
This site uses cookies. By continuing to use this site you agree to our use of cookies: Find out more.