Sean Hannity: Live Free or Die: The Choice of This Election 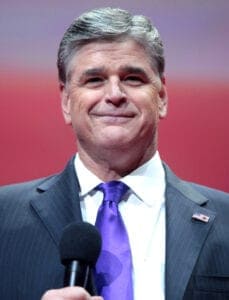 The Democratic National Convention this past week saw Democrats make their arguments for a Joe Biden Presidency. Next week, the Republicans will have the chance to make their case for four more years of Trump.

But responses to the Democratic National Convention have been mixed, with many, like Fox News’ Sean Hannity, leaving the left feeling like the Democrats showed more posture than policy.

Hannity told The Cats Roundtable that Democrats were again making promises they could never fulfill.

“Freedoms are lost in the name of false security—promises are never fulfilled,” he said.

Hannity accused Democrats of lying to viewers and relying on generalizations that hid their true platform. That platform includes programs like the Green New Deal and Defund the Police, both of which he called “madness” and so out of touch, that they actually threaten Americans.

“This is a pivotal election. This is the tipping point,” Hannity said. “This is it.”

According to Hannity, by not addressing the disorder in the country, the violence flaring in cities like Portland and New York City, and omitting almost all mention of China, Trump has a chance to take a stand against Democrats and make specific, policy-oriented arguments for why Americans need him, and not Joe Biden.

“They really aren’t even stating their real true intentions and policies,” Hannity said about Democrats. “What we’re getting is a bunch of slogans, and bumper-stickers, and platitudes. There’s no real substance to what they will actually do to the country.”

Hannity also told The Cats Roundtable that one only has to look at the spending necessary to implement Democratic policies, to see the folly behind the slogans. When boiled down, expensive Democratic policies from Medicare for All, to a Green New Deal, don’t hold water, and could sink an already overly-strapped Federal budget.

“It’s not financially viable,” Hannity said, “and those promises will never be fulfilled.”

He added that the liberal leadership of cities like New York City, Portland, and Chicago and the subsequent violence, show the fall out of Democratic leadership, telling The Cats Roundtable that Biden as President would inhibit “how America recovers.”

He also questioned Joe Biden’s aptitude for the Presidency.

“I look at Joe Biden from four years ago, and Joe Biden today, and I don’t see the same person,” he noted.

Hannity, an early supporter of then-candidate Trump during the 2016 Presidential election, called the President a “force of nature” who successfully won over his own party before he won over the American people in 2016.

“He’s accomplished more than I think anybody ever thought he’d accomplished” Hannity told The Cats Roundtable. “A lot of my Conservative friends did not believe me when I said he would govern conservatively, but he has.”

He said he believed Trump was the only one who could lead the U.S. out of the current crisis and into recovery.

“We’ll be on the road to probably the greatest recovery the country’s ever seen,” Hannity claimed.

With so much on the line in 2020, Hannity told The Cats Roundtable that this election has become a choice between a President who has made America and Americans his priority, and a nominee for a party whose platform seems more and more alien to the average American.

To Hannity, Democrats nurse policies that are the start of a dangerous slippery slope, intending to erode basic freedoms by hiding their intention behind a promising facade of moderation.

“And those promises are never fulfilled,” he said. “Freedom is lost, and then it just becomes a matter of the degree to which your freedoms are impinged upon.”

Newt Gingrich: This Is an “All Out War”

Newt Gingrich - Difficult to see a Trump defeat in November.
Comment
Newt Gingrich: DNC Proves Trump’s The Authentic Candidate
This site uses cookies. By continuing to use this site you agree to our use of cookies: Find out more.