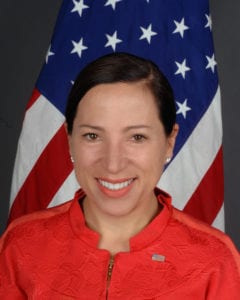 Lt. Governor of California Eleni Kounalakis called into The Cats Roundtable to bring us up to date on PG&E shutting off power to prevent wildfires, as well what California is doing to address the growing homeless problem in the Golden State.

In regards to the uptick in wildfires in California, Kounalakis is pulling no punches.  “First of all,” she told The Roundtable, “we’re dealing with a very unusual situation in California,” concluding that scientists believe the increase in extreme weather events are the effects of a changing climate.

“We have dryer forests than ever before,” Kounalakis noted. “We just came out of a drought, which basically led to the dying off of millions—a hundred plus million—trees.”

The Lt. Governor blames these dry conditions for an infestation of bark beetles that further desiccated the state’s forests.

“Then of course as fires would break out, we also have these unusually strong winds that resulted in fire tornadoes,” she said.

Those fire tornadoes occurred when wind reached at least 70 miles per hour, causing fire to spread so fast it jumped eight-lane freeways and vaporized neighborhoods.

“There is a big effort now to deal with prevention and response,” she stated, but admitted there’s only so much prevention before other problems arise.

With PG&E’s announcement to shut down power lines to prevent fires, Kounalakis called the company’s decision a “difficult situation,” citing PG&E’s “mismanagement and profiteering over safety” as one of the main reasons that makes the move seem too little too late after the Camp Fire in 2018, where the company was found liable in the deaths of over 80 people.

“I think what is happening is that we are not dealing with an actor that has been as forthcoming and frankly as responsible to the ratepayers and the people of California as they should’ve been,” Kounalakis told The Roundtable.

“And if they can’t do it,” she warned Catsimatidis, “then I think that the people will be demanding others step in.”

Turning to the homeless and mental health crisis in California, Kounalakis remarked that both issues were not endemic to California, but sees them as problems “facing the entire country” in ways “beyond what we’ve seen in the past.”

The Lt. Governor admits “California in some ways are the dim of our own success” but is optimistic about the state’s ability to confront housing and mental health issues, citing a provision passed by the legislature and signed by the governor that is a “packaged emergency response to build more shelters, build more housing, and provide additional resources for mental health.”

With her final word to Catsimatidis, the Lt. Governor stated that the emergency response is a “tribute” to California’s desire to face “the humanitarian challenge in our own neighborhoods.”

City Councilman Bob Holden - Closing Rikers is still a bad idea. 40 story neighborhood prisons.
Comment
William Parker - Withdrawal of American troops leaves Kurds at mercy of Turkey.
This site uses cookies. By continuing to use this site you agree to our use of cookies: Find out more.