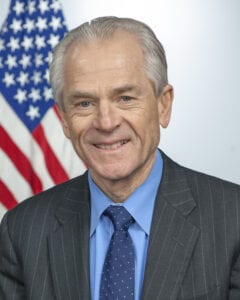 On Thursday, economist Peter Navarro, who leads the Office of Trade and Manufacturing Policy, released a report on voter irregularities, where he catalogs what he has called the “six dimensions of election irregularities” that stole the election from President Trump.

“What I wanted to do was figure out how Donald Trump’s seemingly insurmountable leads in the battleground states of Georgia, Michigan, Pennsylvania, and Wisconsin, on midnight of election night, evaporated into very, very razor-thin Biden leads in these states,” Navarro told The Cats Roundtable.

To Navarro, instead of a simple “silver bullet explanation,” Trump’s seeming loss in the 2020 election was a case of “death by a thousand cuts.” These include what Trump and his allies have claimed are outright ballot tampering, violations of equal-protection clauses, “statistical anomalies,” as well as voting machine irregularities.

“The takeaway is that any given state these six battleground states, they exhibited some or all of these six dimensions of election irregularities,” Navarro noted. “But each was different in their own way.”

He said the report was the culmination of his personal investigations, including thousands of affidavits, over 50 court cases, public testimony, photo, video, first-hand sources, and press coverage.  Navarro urged Americans to read his research, which he claims presents proof of a “coordinated democratic party strategy” designed to flood the ballot box with “illegal and absentee ballots.”

“What I want to do with this report is to give Americans the chess-board view of exactly what’s going on, in the hopes that we will get a full investigation before inauguration day,” Navarro told The Cats Roundtable.

According to Navarro, if Biden enters the White House, and questions about the election results are not answered, it bodes poorly for the future of the American system itself.

“There are already enough people in this country who think this election was stolen,” Navarro warned.  “We’re supposed to be the greatest democracy, not only in the world, but also in history, and if we can’t run a fair election, then this republic will not stand”

He said the month to inauguration day was “history in the making” that would see the US “make or break itself based on how it’s handled, and I do not have a high confidence in our institutions at this point that they will handle this well.”

Navarro’s skepticism comes in the wake of the Supreme Court’s refusal to hear Trump’s legal case, and he told The Cats Roundtable that “some of the people that we have appointed” hadn’t delivered.  But Navarro believed his report presented a cohesive, evidence-heavy case for the President’s legal challenges.

“This report is the best overview of the complexity of the election fraud and irregularities that we now bear witness to in this presidential race,” he noted to The Cats Roundtable.  “And we’ve got to deal with this.”

Rep. Peter King: Relief Package Offers a “New Chapter”
Comment
Dick Morris - The President's veto of the stimulus bill
This site uses cookies. By continuing to use this site you agree to our use of cookies: Find out more.